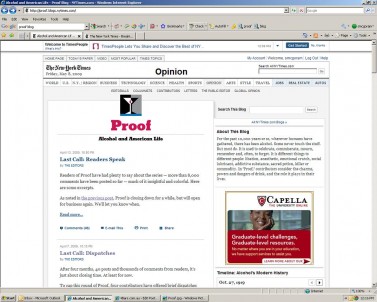 Sitting at a computer all day I do have the luxury of being able to do things like read the New York Times online which has proved to be an inspiration on a number of fronts. Towards the end of last year, for instance, I came across a blog on the site called Proof : Alcohol and American Life. The blog’s contributors offered frank and honest pieces on the “charms, powers and dangers of drink, and the role it plays in their lives”.

This sounded fantastic and after signing up to receive any updates directly to my inbox I began to greedily consume each piece as it came in. What I didn’t bargain for was how confronting this blog was going to be on the subject of  the bottle’s affect on one’s life.

Blogs were posted by journalists young and old; some dedicated soaks or cocktailian writers (like Paul Clarke from The Cocktail Chronicles), others reformed alcoholics or just those who had become jaded with booze. Increasingly each post forced me to re-consider and re-examine alcohol’s role in my own life. From experience this is something I believe is important for everyone in the bar or drinks industry to do regularly.

Now the purpose of this blog was hardly to preach about the evils of alcohol, but it does offer one of the most profound and balanced views on the subject that I’ve ever come across. In turn, recovered alcoholics bashfully admitted that some positive elements did come from the bottle – despite it’s destructive power on their lives – while the soaks admitted to the chaos that was at times unleashed by the poison on their relationships, health and careers.

Some posts looked at important moments in history like Repeal, while another examined how our choice of beverage describes our character better that any star sign ever will. In sooth, the blog easily attained its purpose; an examination of alcohol and its affect on our lives and culture. In my humble opinion Proof: Alcohol and American Life has globally relevant themes and is certainly not limited to just American culture, but drinking societies everywhere.

At any rate, after just over four months, more than 40 posts, and 1000s of comments the Proof blog has called last orders – for the time being at least – but you can still enjoy all the archived posts here.

Alcohol down the ages: What you drink says a lot about who you are and where you’re from

Does size matter? How big is your glass?

The law that launched 1000 brothels (& the Raines Law Room)

The NYT on the economics of beer giants