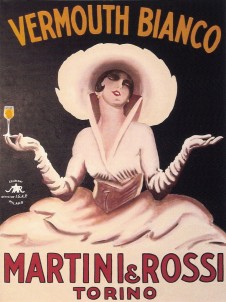 Bringing back the all important ingredient; vermouth

I’ll have a Martini, a Dry Martini, bone dry. You’ve no doubt heard someone say this to a bartender, all cocky and full of bluff. They know it sounds cool. It’s doubtful, however that they know what they’re ordering or why. Basically, they have ordered a glass of cold, diluted gin. Mmmm, doesn’t sound quite so appealing now, does it?

The dryness of a martini is determined by the amount of extra dry vermouth used – ironically, the less extra dry vermouth the more dry the martini. If we go back in time, we will find many incarnations of the famed Martini and the further we go, the more vermouth is used. One of the godfathers of modern bartending, Harry Johnson, published a recipe in his 1888 Bartenders Manual, which among other ingredients called equal parts gin and vermouth; “half a wine glass of Old Tom Gin, half a wine glass of vermouth”. The 19th century Martinez cocktail, considered by many to be the precursor to the Martini calls for a pony (25ml) of Old Tom Gin and a wine glass of vermouth.

Nick Van Tiel from Behind Bars says: “If you look back in history, the ‘dry’ Martini was more likely to be a reference to a shift from using sweet vermouth (as in the Martinez cocktail) to using dry vermouth, not a reference to the amount of vermouth used.  Back in the old school days it was likely that distillers were, in general, much better at making aromatised wines like vermouth than Gin or Vodka. So, these spirits were probably added in much smaller quantities to lift the alcohol content of the cocktail, and over time as the popularity of white spirits overtook that of vermouth, the ratio of vermouth to gin slowly reversed and evolved into the ridiculous measure that we see today.” 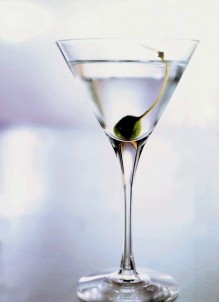 By the time the Dry Martini came to prominence in the 1940s the proportions had been perfected at around three or four parts gin to one part dry vermouth. It was a harmonious melding of spirit and vermouth with the gin softened by the delicate fortified wine. By the 60s, the Martini was around 11 parts gin to one part vermouth. Today it’s more like 50 to one or 100 to one. Vermouth is merely waved o’er the boston glass, or spritzed with Grandma’s perfume atomizer. It’s potent stuff. It’s what London bartending legend Dick Bradsell described as the ‘Macho Martini’.

Who’s to blame? Well, of course, most sins inflicted upon the Martini come courtesy of old Mr Macho himself, Mr Bond. Not only did he shake his Martini (a big no-no in bartending circles) he also ordered it dry and preferred vodka over gin (incidentally vermouth isn’t such a great accompaniment to vodka). Spanish Filmaker Luis Bunuel was such a fan of a dry martini that he suggested “simply allowing a ray of sunlight to shine through the bottle of Noilly Prat before it hits the bottle of gin.” Other bar legends include the boxer who just liked to stare at the bottle of gin and whisper the word ‘vermouth’.

Absurd. The Martini is a mixed drink and as such requires more than one ingredient. Well, it actually requires three; gin, extra dry vermouth (very often the French Noilly Prat) and ice (which becomes water). Without the vermouth, its just water and gin. You’d better hope its damn good gin.

No wonder its time to bring back the vermouth. Extra Dry French Vermouth is an aromatized wine that is just bursting with flavour. Making it is pretty simple; young fruity wines are left in wood for prolonged periods producing a full-bodied amber coloured wine like Sherry, which is then infused with a blend of 20 or so herbs and spices. When added to gin; a marvelous marriage is created.

Take this story as a warning. The Dry Martini is no longer cool. Bartenders almost unanimously deplore the anti-vermouth stance of late 20th century. A cocktail list recently passed my desk from a new bar up in Brisbane, Sling Lounge, opened by three career bartenders. On the page dedicated to The Martini, it reads: “The Martini is always made with Gin, and always includes Vermouth. If you just want a glass of cold gin, then why ask for a Martini.” The exceptional team of bartenders at Hugo’s Bar Pizza in the ‘Cross have done extensive tastings of The Martini in order to come up with the best recipe that lets both the vermouth and gin shine. Their recipe is 60ml gin to 5ml vermouth but they adapt the recipe depending on the gin used. Beverage Director, Mark Ward, says: “If you want something a little lighter or dry then have dry vermouth with a London Dry gin but if you want something more refreshing then have a South, Hendrick’s, Martin Millers Millers or Tanqueray no. Ten martini with a Lillet Blanc wash and a lemon or orange twist.” (NB. Lillet Blanc is another French aromatised wine that is slightly bitter.)

If you’re confused about what to order then take the advice of Laura Moorhead from San Francisco.  In the early 90s she wanted a Martini that was heavy on the vermouth but didn’t know what to ask for; there was no name for a gin with lashings of vermouth. So she racked her brain, played opposites and asked for a ‘Wet Martini’. The name has stuck. I have found recipes in a variety of cocktail books that call for a range different proportions; anywhere from three parts gin to one part vermouth or equal parts gin and vermouth. The upshot is ‘heavy on the vermouth’. Apparently HRH Prince Charles is a fan of the old 2 parts gin to one part vermouth. If it’s good enough for him…

This story featured in Good Living in 2007.