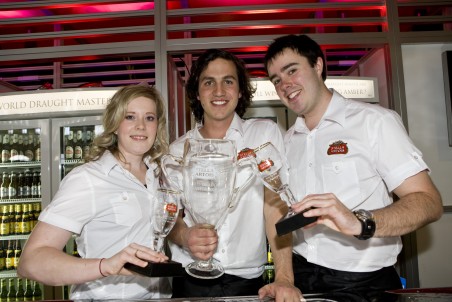 Entries are now open for the Stella Artois 2009 World Draught Masters so be the first to compete in this new format competition for your chance to win over $30K in cash and prizes.

The prize includes a Business Class flight for two to Brussels visiting the Stella Artois brewery in Leuven, Belgium before flying on to New York to compete in the final. The World Draught Master winner receives the additional prize of 2,500 Euro.

Competitors must master the seven minute, nine-step pouring ritual, resulting in the beverage being served in the cleanest glass, at the correct temperature, with the correct foam level and with no overflow.

Selected finalists will be flown to and accommodated in Sydney where they will compete in the national final, held on Wednesday September 9 2009.

The 2009 Australian Draught Master will receive:

For application forms or more information regarding the competition please contact Steve Rainey at HotHouse Media & Events on 03 9682 0222 or steve@hhme.com.au.