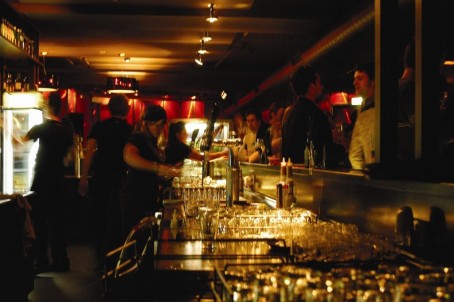 People of Brisbane and Sydney be warned! There could be a small bar in your neighbourhood very soon. It may serve wine, perhaps a craft beer or two and probably some kind of snack, perhaps even tapas-style food! There won’t be the droning ‘dingdingding’ of the pokies and they will probably shut at midnight, maybe even earlier, god forbid. In fact, make sure you don’t go to any of these small bars, cos there’s bound to be violence, drunkenness and noise on a scale you’ve never heard before. Unless you live in Melbourne, and then you’ll know all about it. Because apparently in Melbourne, the scourge of the small bar has unleashed a plague of iniquity on a formerly peaceful town.

Ah, you have to love the ridiculousness of it all. In the last week we have heard that the CEO of the Queensland AHA, Justin O’Connor is opposed to a call for more European-style cafes and bars on the Sunshine Coast because it “does not make economic sense”. O’Connor said there was a “fundamental disconnect” in effectively allowing more bars to exist as a means of curbing binge drinking. “If they’re setting out to reduce the harm associated with alcohol use, how does that sit with more liquor outlets?” Mr O’Connor said.

So, no real surprise there. But then we also had the Chris Watters CEO of DrinkWise Australia coming out in oppostion to small bars, saying:  “What we know from Melbourne is – and I am working and operating out of Melbourne at the moment, where the boutique bar culture is alive and well – is that there are substantially more alcohol-abuse problems in the Melbourne CBD than there are in Brisbane. More deaths, more violence, more admissions into emergency areas.” Very strange that someone in his position would be siding with the Hotels Association, but anyway…

The forum on 4bars.com.au about this topic has been going strong this week, with many of our friends in Melbourne posting their thoughts on the completely disconnected and out of touch stance that both these men have taken. Thankfully a sensible word from Ben Tua who points out that all this ‘Melbourne violence’ is associated with the large venues on King St and Chapel Street.

On a positive note, we also heard word of a website in Brissie that is dedicated to fostering boutique bar culture. Check it out: www.b3.net.au

So check out the comments our readers have been making here. And add your own thoughts. We want to know what you think!