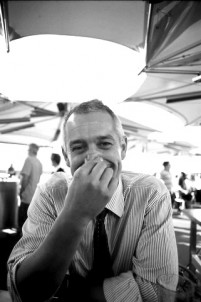 “Finally discovering the first name of America’s first celebrity bartender was the highlight and something I could hardly wait to share with the attendees of Mixxit”.

A real highlight of this year’s ‘Tales of the Cocktail’ was Dave Wondrich’s take on the History of the Modern American Saloon. Previously, the only time I had been significantly injected with such important perspective was after reading the first ‘Mixologist Journal’ when I truly discovered what could be called the origin of the species; the Punch.

The History of the modern saloon is a fascinating journey. Wondrich starts in the UK’s Alehouses of sixteenth century.

“People gathered together drank heavy ales and small beers which were interestingly fermented by the ‘brewsters’, the women“.

At this time you basically had three different types of drinking establishments, these Alehouses, the Tavern (some Taverns offered lodgings called Inns) and Punch Houses. Taverns by all accounts were a little more middle class, were much more regulated and had the option of wine and the odd gambling setting. London had approximately forty such establishments at this time.  By contrast Punch houses were not so ‘highbrow’, and used to serve Punch out of holes in the walls, or the humble beginnings of the service window or hatch. Punches would be literally composed of ale, wine, citrus, sugar and a combination of spices.

As the Punch moved over to the New World it became more complex with more creative concoctions. Seventeenth Century New England saw something called Sack Posset develop, still a form of punch but with sherry, cream, eggs, spices and ale, again served hot. By the early eighteenth Century punches are still rife, but in their very essence they start to dilute along with the idea of communal punch bowls, as you were not on form if you walked away from a laden punch bowl. Clearly, time was becoming more precious so the drinks changed.

The true gem of information Wondrich had in store came when he finally dropped the first name of America’s first celebrity bartender working at the City Hotel, formerly only known as Mr Willard..

He was born in Massachussetts in 1792; in 1811 he went to the City Hotel, and worked there until 1837, when he retired back to Massachussetts. From 1843 to 1849 he and his partner Chester Jennings came out of retirement to run the hotel again. In 1849 Willard went back to his farm, where he stayed until his death in 1876.

It is through this man Wondrich tracked the emergence of the modern saloon (from the French word Salon). You see most of the new Hotels in Manhattan used to greet guests with bowls of Punch in the lobby. However, apparently one day in 1817, a Virginian guy walked up to Mr Orsamus Willard and asked for an Iced Mint Julep. (How does he get this info)! Here is the rub. They were doling out individual punches to such a great extent that the Hotel management decided to move this beverage aspect of the business downstairs. “By the early 1840’s the drinking of Punch in the lobby was exiled to the lower floors as to stop drunken people getting in the way of guest trying to check in! This way they could concentrate on proper drinks service and worry less about the security of locking up the booze in the cages of the lobby.  The hotel lobby is dead, long live the saloon! Here’s to Mr Orsamus Willard the new Jerry Thomas.

0
Australian Bartender October 26, 2009
No Comments Yet