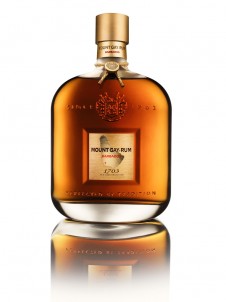 In honour of its rich heritage and centuries-old excellence, Mount Gay Rum has crafted an entirely new product to appeal to the most discerning of spirit connoisseurs. Created by Mount Gay Master Blender Allen Smith, the 1703 Old Cask Selection will progressively become available in the most exclusive destinations across the world.*

“The island of Barbados has long been a symbol of luxury, glamour and revelry, and we believe we have captured its essence in the 1703 Old Cask Selection. The rum is created from the sugarcane and coral-filtered water of Barbados and then aged for 10 to 30 years producing a smooth, rich taste with a hint of tropical notes.”

One of the most highly awarded rums in existence Mount Gay Rum Extra Old has been repackaged to reflect its exceptional quality. The luxurious, embossed oval bottle and label of deep chocolate and gold have been carefully selected to encase the Mount Gay Rum Extra Old to dramatic effect. Elegant, classy, and worthy of the Mount Gay brand name and its position as the most prestigious rum in the world, the new packaging is a reinvention of the rum that invented rum.