8am       After a long night of Salsa dancing I awoke to the sound of a growing ringing noise in my ear – thank god for the wake up call! Racing down stairs we jumped on the bus to leave for the La Carona Cigar Factory and big day ahead.

9:20am So much for the bus leaving at 8:30am sharp- could have had an extra hour in bed! We stopped off at Revolution Square for some photos of the Plaza de Revolution as well Che Guevera and Fidel Castro’s faces in wrought iron on the side of government buildings. Next stop – La Carona Factory. 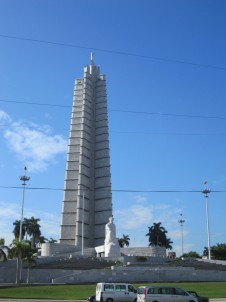 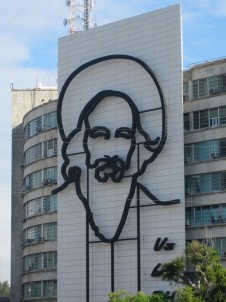 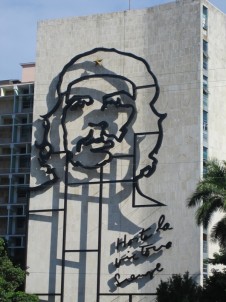 #Fact# Ernesto “Che” Guevara (June 14, 1928 – October 9, 1967) commonly known as Che Guevara, El Che, or simply Che, was an Argentine Marxist revolutionary, physician, author, intellectual, guerrilla leader, military theorist, and major figure of the Cuban Revolution. Since his death, his stylised visage has become an ubiquitous countercultural symbol and global insignia within popular culture. While living in Mexico City, he met Raul and Fidel Castro, joined their 26th of July Movement, and invaded Cuba aboard the Granma with the intention of overthrowing U.S.-backed Cuban dictator Fulgencio Batista. Guevara soon rose to prominence among the insurgents, was promoted to second in command, and played a pivotal role in the successful two year guerrilla campaign that deposed the Batista regime.

9:45am     After a decent 15 minute detour passing by the largest cemetery in Cuba (which is 56 hectares and bigger than any cemetery in the USA, and once contained Christopher Columbus’s remains too) we arrived at the La Carona Cigar Factory to be told “No Cameras allowed as they have secret rolling methods”.

10:00am  There was a distinct smell of cigars as soon as we stepped through the saloon style doors of the biggest cigar factory in Cuba (producing favourites such as La Carona, Cohiba, Montechristo, Romeo & Juliet – 12 in total).

Our guide lead us up to the first level of the three storey building to show us phase one; sorting the leaves into colours and quality.

Level two is the real production stage and one of my favourite parts of the trip so far. The workers were side by side, combining three different types of leaves, rolling them together, compressing them and intricately finishing them off by adding the tip on all while singing along to their favourite Cuban music.

Next level includes more sorting, from lightest in colour on the left to the darkest on the right and the all important wrapping in ribbon. On the other side of the factory was the box making and we witnessed the elaborate detail which goes onto each box. Our guide informed us that there were over 900 staff who worked there and 60% of which were women. Everyone had the chance to purchase their own cigars to take home (although I’m sure a few boxes will be smoked by the Serbian boys before they leave!)

11am                 We had an hour to kill before lunch so we headed to the town for a bit of shopping. There were the typical touristy bits and pieces which were the same in every shop.

12:15pm           We all met at El Patio for lunch – another Mojito on arrival! The oldest blokes in town played live music and enjoyed themselves just as much as we did.

2:30pm             Free time – We walked around old Havana Town and visited the Art museum and continued buying bits and pieces for home and took in the beautiful old architecture. With the little English some Cubans know, they always seem to know “Australia” (when asking where we are from) and referencing it to Kangaroos and take no hesitation in showing us how they move. We took a Coco Taxi (basically a yellow coconut looking vehicle on wheels) and zoomed back to the hotel in the rain for some rest before our last night with the Masterclass group.  Really don’t want to think about leaving right now! 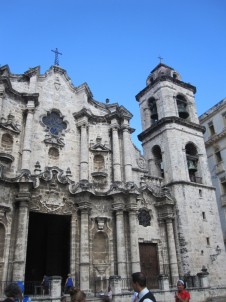 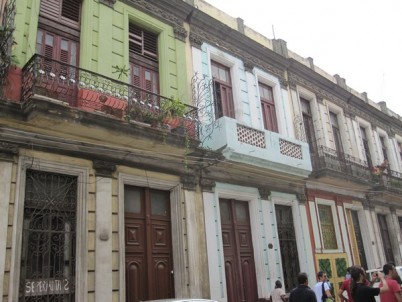 #Fact# Havana is unique due to its unrivalled rhythmic arcades built largely by Spanish immigrants. Many interior patios remain similar to designs in Seville, Cadiz and Granada. Neo-classicism affected all new buildings in Havana and can be seen all over the city. Many urban features were introduced into the city at the time including gas public lighting in 1848 and the railroad in 1837. In the second half of the 18th century, sugar and coffee production increased rapidly, which became essential in the development of Havana’s most prominent architectural style. Many wealthy Habaneros took their inspiration from the French; typifing the design of many houses of this period with portales of neoclassical columns facing open spaces or courtyards.

8.30pm             The group is picked up and we’re transferred to the amazing Hotel Habana Libre, where the top floor of the hotel has been transferred into a gala dinner for all of the participants. The Sierra Maestra Dinner is amazing and we’re treated to more authentic Cuban music by Karisma while all having our caricatures drawn at the table.  The team from Havana Club International make a brief thank you and finale speech, while we sip on Havana Club 7.  The entire evening has been an amazing finale to an adventure packed week. 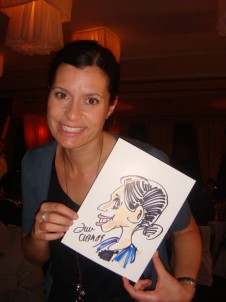 11.30pm           Just when we thought it was safe to come out of the bushes! We’re transferred into the room next door – a vast nightclub overlooking the city of Havana.  Turquino is known for its famous Cuban band – Yilloy Calle Cuba, whose lead singer took a fancy to Georgia!

Quote, singer to Georgia “Hey Gringo, you pretty lady, I like you”  Georgia to singer “umm thanks I guess”.

To say I knew what time it was that we got home would be lying…. But I’m all twirled out and ready to collapse. What a great night.

0
Australian Bartender January 29, 2010
No Comments Yet