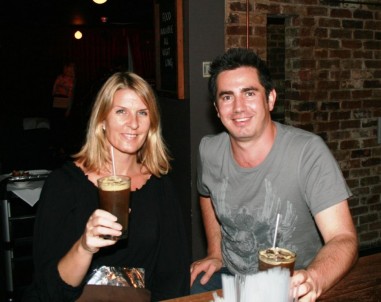 Well here it is folks a little photo gallery to prove to you that we have not been idle this Parched March. Below is a visual feast of some of the drinks, food and, most importantly, people that we’ve encountered along the way.

It’s been a fun experience  experience thus far, though I think that the coming two weeks will prove that 30 days isn’t even close to being enough time to fully experience Sydney’s thriving bar culture.  Don’t get me wrong we’ll hit 30 bars in due time – it’s just the more we delve into Sydney’s liquid culture the more we see it’s charms.

We’re yet to hit Balmain’s pub scene and the Rock’s is calling too. Then there’s Newtown and Glebe. Bondi is not to be missed either. The CBD is still offering some sophisticated goodies… the list goes on. Because of this Amy and I have decided that we might not stop at 30 but rather keep trucking on to see what we can tally whilst doing our best to maintain a healthy lifestyle and a day job too!

Before I get too carried away there was a point touched upon during our barroom conversation this week that I think to be very important and perhaps timely for a Friday afternoon. The point I’m referring to is the crucial role that an after-work drink plays in our increasingly busy lifestyle.

Sure a bit of exercise is great for reliving  stress and tension. It helps many push aside the the problems they may be facing at work or in their personal life. There is no denying, however, that a social after-work drink with colleagues is one of the best and most healthy (mentally and socially) ways to debrief the ordeals of the week.

“A social after-work drink with colleagues is one of the best and most healthy (mentally and socially) ways to debrief the ordeals of the week.”

Blowing the froth off a couple of cold ones after a hard days work is a proud Aussie tradition and not just for labourers and tradies. Before we open a bottle of Pinot Noir stick up our noses and pretend we’re too good for that remember that this has become part of Australian culture for a reason. Pubs, hotels and bars are part of the community and play an important role in the entertainment and relaxation of hard working Australians. Yes I’m an advocate for more small bars and a diverse drinking culture. I can swirl a Burgundy and sip a Negroni with the best of them, but very shortly I’m off to the pub.

Oh and here’s the run down on where I’ve been thus far (Ms Cooper has a different list):