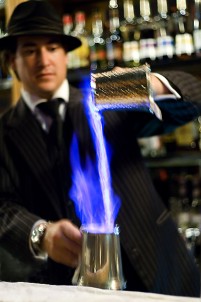 Thursday May 6 officially marks the beginning of World Cocktail Week – the week in which the cocktail loving world will celebrate  the 204th anniversary of our favourite drink category being defined in print.

In case you don’t know the story of the first definition of the cocktail visit a little aside to this news item published here.

As the week quickly approaches many of the county’s top bars are advertising their special cocktail programs marking the occasion. In fact, 2010 has seen an unprecedented level of support for the week with many events planned the length and breadth of the country. This year has also seen World Cocktail Week touted to the consumer  – a sign that the humble cocktail is no longer just part of the bartender’s fancy but a drink of the masses – a beverage of the mainstream just like it was back in 1806!

If you’ve been following 4bars.com.au you’ve already seen Merivale’s extensive line up here, but bar many more bars are joining the celebrations.

Melbourne’s 1806 is showcasing the evolution of the Martini throughout the month of May, from the earliest mentions, to the most modern molecular interpretations.

Not to be left out in the cold is the cocktail bar du jour Eau-De-Vie. This haven of fine libations is hosting events from May 10 – 13 including a cocktail degustation and a Martini Masterclass. A full listing of their events can be found on Facebook. Hunt the bar down, become their friends and enjoy the all the events planned for this week of cocktail celebration.

Mondo Bartenders have also announced that they will be holding a bespoke cocktail event in conjunction with The Museum of the American Cocktail at The Vanguard in Newtown. The Mondo team will be offering bespoke $10 cocktails designed on the spot for each guest. Proceeds from the event will go to the Museum and ‘Onegreencup’ – an Australian initiative which promotes a re-usable cup scheme for all events having a massive impact on reducing waste.

If you’ve got World Cocktail Week celebrations planned fire me an email to smcgoram@spantonmedia.com or post a comment below.

If there’s not an event near you that you can attend, whip yourself up your favourite mixed beverage and raise it in toast to proud cocktailians past and present.

If you like to know more about the history of the cocktail paying a visit to The Museum of the American Cocktail is a great start. While you’re there become a member – which will give you access to some cool out of print cocktail books – and help preserve the history of grand beverages and the bartending craft.