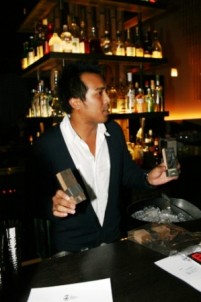 In an attempt to broaden the Japanese single malt’s appeal to a wider range of consumers Suntory Australia have developed stylish steel cups to serve what is perhaps Japan’s most popular mixed drink – the humble whisky highball (whisky, ice and soda). 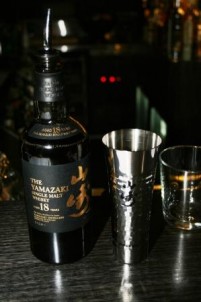 Matthew  Barnett – a Club Suntory trainer – took Sydney’s Ocean Room team through the history and production of Yamazaki whisky (Japan’s first whisky distillery which opened in 1924) before tasting the Yamazaki 12 and 18 year old whiskies (only a handful of bottles of the 18 year old are available in Australia).  Barnett then took the team through some simple highballs all made with the the Yamazaki 12. Using maple syrup, apple juice, bitters and Mozart Dark Chocolate liqueur Barnett was able to come up with several delicious combinations that complemented the flavour profile of the spirit.

Suntory is offering selected accounts with a love for Yamazaki the use of their newly developed highball cups.