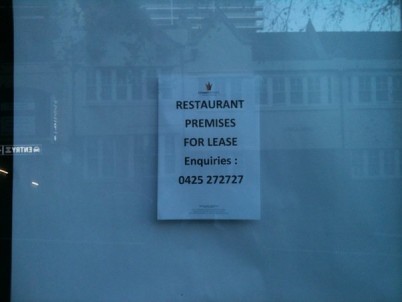 The Bayswater Brasserie which closed in March for a quick revamp is looking increasingly unlikely to re-open.

The Sydney institution which opened in 1982 and last served a Martini on Saturday March 20, 2010 has now been shut for three months despite originally pledging to re-open within two weeks.

This latest notice posted on the window of the ‘Bayz would suggest that lease negotiations have failed with the previous operator Robert Smallbone.

It is time to say goodbye to the ‘spiritual’ home of so many of Sydney’s bartenders.

Good drinks and good music for the Cross

Prefuelling proves to be a major factor in Thomas Kelly tragedy