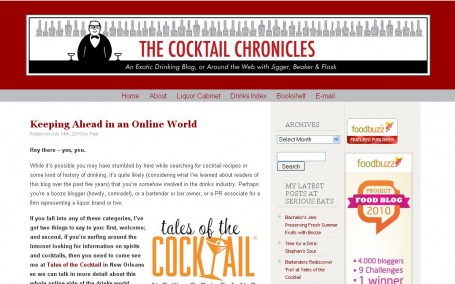 Technology has done some wonderful things for our industry. The internet alone has allowed bartenders from Moscow to Melbourne to chat and learn from each other. But there has also been a downside in that now anyone can publish anything they want, becoming armchair critics and quasi experts on our industry overnight. Enter the cocktail blogger.

There are some blogs that I really enjoy that are written by some folks that (as far as I know) have never worked professionally behind a bar.  The musings from Robert Hess, Ted Haigh, Paul Clarke, David Wondrich and several others provide some very entertaining, insightful and informative prose and they are some of the most influential personalities on the cocktail circuit today.

Robert Hess, a veteran Microsoft employee based out of Seattle, was one of the first with his Drinkboy website which was a great forum for bartenders to liaise and discuss all sorts of problems that affect them or the industry, whether it was the origins of a specific cocktail to the best place to buy a vintage julep strainer. His newer site (thechanticleersociety.org) is another excellent resource and I especially like what he’s done because of his open forum format where people from all over the world can chime in with their two cents, much of it extremely informative.

For any bar owners or managers – I’m sure many of you have had an issue with a blogger at some stage. Getting a rough review by a reputable pro is hard enough to stomach. But when it’s written by some amateur with a keyboard and enough money to eat out, that’s when it can really sting. What I have a problem with is that a lot of people actually pay attention to them and hold them in high esteem. In short, they’ve become too powerful when many have only been doing this for a couple of years and never even walked behind a bar.

When I was at Singapore’s Tippling Club recently, they have a ‘no photography’ policy clearly written at the bottom of the menu. I asked Australian owner Matt Bax about this and he said it was implemented because several bloggers were putting more emphasis on getting a good photo (or in some cases bad photos of their half eaten food) than actually enjoying what the chefs and bartenders had spent months creating. Fair enough.

“Blogging is huge here in the US and the word has become, dare I say it, often despised.”

Most bar and restaurant owners couldn’t care less what a blogger says about them. Most of the amateur ones are rarely given a passing thought. But the powerful food and drink blogs can, like a recognised critic, be an influential forum where anyone can vent their frustrations. Blogging is huge here in the US and the word has become, dare I say it, often despised.

Many amateur cocktail bloggers know their shit. Some more than most bartenders. But unless you’ve stood behind a bar on a Saturday night, being yelled at, spat on (it’s happened), while you’ve got a dozen drink orders rattling around in your head, then I don’t think you can understand bartending on a deeper level. Making drinks at home and dissecting the origins of the French 75, Martinez or whatever is one thing. But truly understanding what this business is all about is another completely. I read how one blogger recently tended bar for the first time and came up with such asinine comments as “drunk people are kind of cute, and are also quite annoying” and “minor scrapes and bruises are part of the job”. How very insightful. 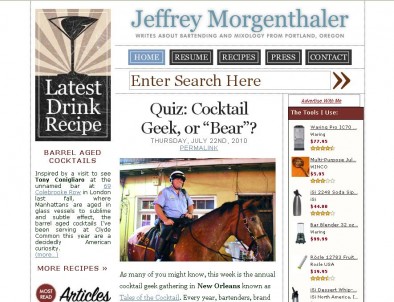 A number of bloggers propagate themselves as authorities on classic cocktails and bartending when they also have ads or stories on the likes of bubble gum vodka or video footage of them making something heinous with strawberries and cream. It’s little wonder many of them have become a source of hatred amongst us bar professionals. Clearly having a blog has become great sources of revenue but many lack integrity.

Then there are blogs written by those who have worked, or still work behind a bar. I especially like Jeffrey Morgenthaler from Portland, Oregon. Not only an amazing bartender known around America but a good writer with always something interesting and informative to say. On this level I say: Long live the blog!*