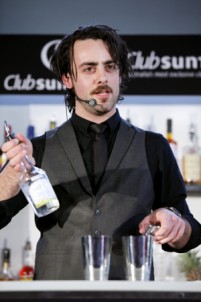 One of Australia’s toughest and most prestigious bartending competitions is only a week away. In 2010 we will once again see the crème de la crème of Australia’s bar fraternity duel it out in front of their peers for the title of Bartender Magazine 2010 Bartender of the Year.

Round one will be held on Monday, September 20 at the Argyle Hotel in The Rocks with participants sitting a rigorous written exam. Then on Wednesday 22 the select finalists will go head to head in an all out, drinks mixing, crowd pleasing shake off where only one can emerge on top.

Chris Hysted, 2009 competition winner said; “The competition, without doubt, was the most fun and challenging, but overall the most rewarding and exciting experience of my career.”

Putting on such an amazing and well recognised competition obviously requires a dedicated sponsor and it is a pleasure to once again thank Club Suntory – as the official sponsor for the 2010 Bartender of the Year Competition – for their continued support of the Australian bar industry.

To be part of the crowd for the finals you must purchase a seminar pass available through the BarShow Week website.

Ones to watch in 2020: Joey Folkersma from Chow, Darwin