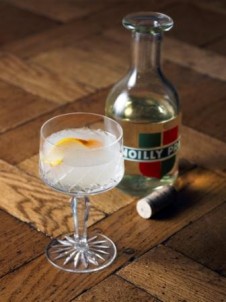 This article was published in Bartender Magazine, September 2010
By Edward Washington

The 1906 Hoffman House Bartenders Guide published what can be considered the first recipe for the Dry Martini. The growing trend toward a ‘dry’ style Martini can be traced back to 1897 when the New York Times quoted a bartender who said customers preferred their potent potables “the drier the better.”

By 1900, author Lilian Bell wrote that it was possible to order a Dry Martini with an olive in Paris showing that the cocktail’s style had spread widely and that French Vermouth was now in vogue. While a ‘Dry’ Martini of the 1900’s may still differ from one today there is one thing that makes a sweet or dry Martini what it is; vermouth.

The best explanation for the Martini’s conception is that sometime following the 1870s – when Italian vermouth was more readily available in the US – enterprising bartenders mixed it with gin and were given favourable responses by their guests.

By 1900, author Lilian Bell wrote that it was possible to order a Dry Martini with an olive in Paris showing that the cocktail’s style had spread widely and that French Vermouth was now in vogue.

The earliest records that stand as Martini ‘originals’ from the 1880s – like the Martinez – often  include sweeteners such as gum Arabic or maraschino liqueur in tandem with sweetened Old Tom gin, Italian Vermouth (sweet) and orange bitters. William ‘Cocktail’ Boothby’s American Bartender, published in 1891, drops this tooth achingly sweet formula for his ‘Martini Cocktail’ citing the Old Tom and Italian Vermouth to be sweet enough.

By the dawn of the 20th Century dry gin started to become more fashionable and the flavour profile was found to be better complimented with the newly available French dry vermouth, namely Noilly Pratt.

Following World War One, prohibition in the US fired up the American thirst for stronger drinks as people raged all night during the ‘roaring twenties’. The vermouth proportion slowly evaporated until it became kosher to simply look at a bottle of Vermouth while drinking gin -Winston Churchill style.

The rise of fascism in Italy during the lead up to World War Two damage Italy’s export market and the sweeter styled vermouths became harder to source, thus paving the way for a French takeover and remaining until today as an obligatory, but often minuscule ingredient.

Use a mixing glass full of shaved ice.

Follow this link to read another fantastic Martini story by Frank Moorhouse.

0
Edward Washington September 28, 2010
No Comments Yet