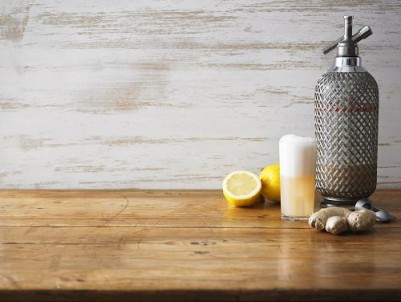 Carbonated water, seltzers or soda water have been a popular phenomenon since the late 18th Century when one Joseph Priestley first discovered a method of infusing water with carbon dioxide to make carbonated water in 1767. Commercial applications, however, were pioneered by Jacob Schweppes – a German born, naturalised Swiss watchmaker and tinkering scientist who founded the Schweppes Company, in Geneva, in 1783. Since this time carbonated water and flavoured effervescent drinks have become a mainstay of the bar and a profitable concern for major multinationals.

To give carbonated water its sparkle carbon dioxide (CO2) must first dissolved into water (H20) which is best achieved under pressure. When the pressure is released so too is the CO2 reverting back into gas as it escapes solution.

Originally carbonated waters were believed to have curative properties being a remedy for feverish ailments, an excess of bile, nervous affections and the debilitating consequences of hard living. More recently carbonated water has been accused of causing tooth decay due to its low acidity. Both claims are absolute nonsense. Fizzy water really is just water with bubbles – it’s the addition of sugars which cause a health risk.

“Originally carbonated waters were believed to have curative properties being a remedy for feverish ailments, an excess of bile, nervous affections and the debilitating consequences of hard living.”

Flavoured sodas, however, are immensely popular despite the toothache they may cause. And so they should be – they’re darned tasty and mix amiably with another one of life’s great faux curatives – alcohol.

Some of today’s most common mixers, tonic water, cola and ginger ale were all invented during the 18th and 19th centuries and they continue to be big sellers around the globe though the range of flavours now available is dizzying.

Soda siphons reached the peak of their popularity during Prohibition. Flavoured sodas were instrumental in masking the flavour of illicit hooch and plain old carbonated water in a siphon also acted as a handy fire extinguisher. Soda Stream, a domestic appliance for imbuing water with CO2, was hugely popular in the 1970s and ’80s. The appliance still has a cult following and now we are seeing the return of the soda siphon in bars too.

The beauty of the soda siphon in modern bars is that you’re able to come up with flavours unique to your venue and create quick and easy cocktails.

The recipe below is for ginger soda – a spicy, modern interpretation of ginger ale which can also be substituted for ginger beer in several popular mixed beverages.

Build in a rocks glass with ice and garnish with half a lime shell.

Shake and strain into an ice filled highball. Charge with ginger soda and garnish with a lime wedge or fresh raspberries.

Build in an ice filled highball. Garnish with a lime wedge.

1. Never overfill your soda siphon. Overfilling can lead to breaking your siphon for good or even injury! Read the makers instructions or, if you’re using a vintage glass siphon, fill up to the line mark on the inside of the glass.

2. Always fine strain whatever liquid you are putting into your siphon otherwise pulp or particles clog it up.

3. Chill the liquid and your soda siphon before use and serve with lots of ice. Your drink will stay carbonated longer if it is well chilled.

4. Give the siphon a good shake before use. Unlike a bottle mixer you want pressure in your siphon when dispensing your soda. Agitating the liquid releases some of the CO2 from solution and thus builds pressure.

1. The term seltzer water is a genericised trademark – much like Band-Aid, Xerox or Heroin (seriously) – derived from the name of the German town of Selters where naturally carbonated water has been commercially bottled and shipped into all parts of the world since the 18th century.

2. The term soda comes from the fact that many soda waters contain sodium salts to mimic the flavour of mineral salts found in naturally sparkling mineral water. They are also used to counteract the slight sour taste that is derived from carbonic acid (H2CO3) – a weak acid formed by the reaction of H2O with CO2.

3. According to an article by Brain Grapetine, entitled Seltzer Bottles – written for the The Federation of Historical Bottle Collectors’ magazine Bottles & Extras – the modern soda siphon was invented in 1829. Two Frenchmen (un-named in the article) patented a hollow corkscrew which was inserted through the cork into the charged bottle of soda water. The spout portion of the corkscrew contained a spring operated valve and thus the liquid was only able to escape the bottle through releasing it.

Here’s seven 10-second cocktails to speed up your service

‘What was the movie when the sheilas got up on the bar and danced?’ Watch new series, The Pub With No Beer