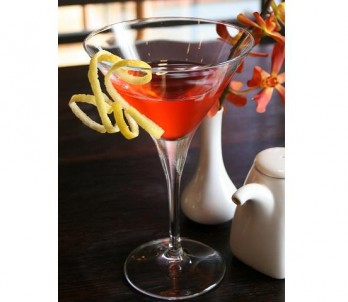 Cocktails designed and made by the bar team at Sake Restaurant and Bar
12 Argyle Street
The Rocks
www.sakerestaurant.com.au

What is it that makes a Martini? You’d have to think along the lines that the traditional slant is gin and vermouth mixed together and served neat in a chilled glass. The botanicals of both products compliment one another and have become one of the most recognised drinks in the world. Others might argue however that the whole Martini camp is just a little bit uptight and that the various concoctions served up in Martini glasses and labeled with the ubiquitous ‘tini on the end are the future of martini drinks whether you like it or not. Hmmmmm…not so sure. But what is certain is that the martini in its finest form is a well mixed drink that has equal proportions of heritage, technique and a certain amount of ‘theatre’ performance about it. Half the fun in making a Martini is the prolonged theatrics you can carry on with and the delicacy that it often involves – right down to the whiff of vermouth added from an antique perfume atomizer.

Recently Bartender put the idea of the Martini’s heritage to the team at Sydney’s Sake Restaurant and Bar in the hope of a little bit of cross cultural fusion and some superb drinks, here’s what they came up with. Thanks to Dan and the team for taking time out to get involved. 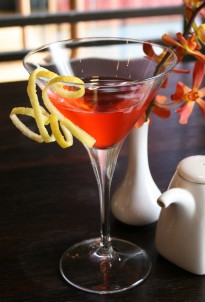 Add all ingredients into a stable, thick and non-insulated six ounce glass. Chill the mixture in the freezer so you don’t let the ice to dilute the cocktail. Takes time but it’s worth it. Garnish with yuzu fruit twist.

“While the team was waxing lyical about the task, I just wanted to get it done! So I chose the ‘Elite’ and a few amazing ingredients that would compliment the Russian supremacy, put them together and this was the first creation! Boo Yah!“ 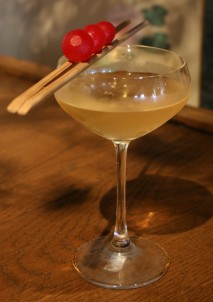 Add ingredients to a Boston glass and stir briskly using purified ice so as not to dilute the drink. Single strain into a Martini glass and garnish.

“The 666 vodka philosophy is to invoke ‘mystery, intrigue and desire’, instilling a spirit of pure evil into the vodka. So I wanted to create a drink with intense flavours that you don’t expect, but that grab you and linger. Garnish with red cocktail onions.” 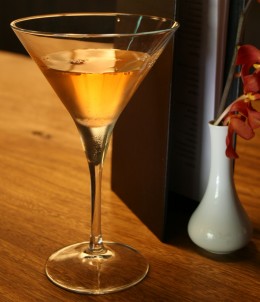 Cocktail name: Chado “The way of the tea”

Method:
Infuse the Grey Goose with the tea. Rinse martini glass with the whisky and soak the sugar cube with bitters. Crush sugar cube in a Boston glass and add ice. Pour in vodka; give a quick stir so that you won’t loose the intensity of the drink and strain into a martini glass.

“Genmaicha tea is a Japanese tea with toasted brown rice. I wanted to match it with the Grey Goose for its grainy aromas without compromising the flavour of the vodka. The bitters and the tea give intensity to the drink while the Yamazaki rinse compliments both other ingredients. Drinking mans drink – no garnish. Genius.” 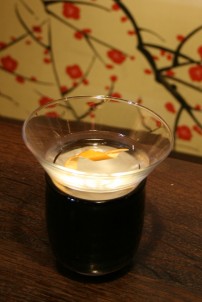 Add the shiso leaves to the Boston glass and add ice and vermouth. Strain away excess. Add remaining ingredients and stir blind (eyes closed!) Double strain into a martini glass and garnish with pink grapefruit zest.

What Sam Says:
“Junipero Gin is a very powerful and aromatic style of gin so I wanted to balance it out by using more subtle flavours. I also wanted to give it a distinct sake twist by using shochu and plum wine. The shiso brings through a much needed herbal bitterness as well.” 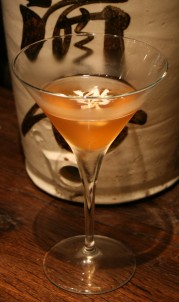 Method:
Add all ingredients in the Boston glass and shake gently so as to not ‘kill’ the gin. Triple strain into a martini glass and garnish with elderflower (optional).

“TMD’s Lilly Pilly Gin inspired me to create a cocktail that combines the flavours of both east and west. The bergamot in Earl Grey tea has a distinct aroma that compliments the Lilly Pilly Gin. Elderflower adds a bit of old world sweetness, as do the floral notes of Kozaemon Tokubetsu sake.”