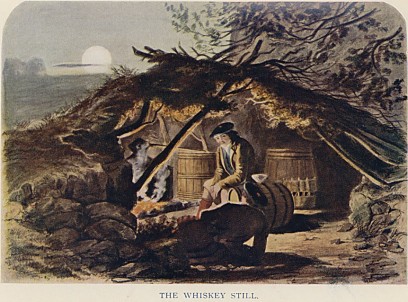 This history piece featured in the April edition of Bartender magazine

Many of the quotes in this history piece have come from The Highland Whisky Smugglers, as well as a number of research papers on the growth of the illegal whisky trade in Scotland.

The lonesome and treacherous Highland trails have been the saviour and the demise of many a Scot. The sodden and rocky paths wind through the hills and vanish in the gullies. They appear through the cairns and trail off in the fog and while they often lead you home, they can easily lead you astray.

In the year 1745, the many Highland trails that cut their way through the lands were the lifeblood of Bonnie Prince Charles, the man who had unsuccessfully led a Jacobite rebellion against the Government of the day. With his army bloodied and crushed on the fields of Cullendon he took flight to spare his neck and was sheltered for over a year by the good will of the people that he had been fighting for.

Even with a £30,000 price on his head (a sum that would have made a Highland man or woman rich beyond their wildest dreams) the good folks new that to turn him in would mean that they would not be welcome anymore in their Highland home. So it was that he lived by the Highland trails, and was eventually able to escape back to France with his head firmly on his shoulders.

At around the time that the flighting Prince was trekking the dour and foggy hills, the Scottish nation was beginning to find itself a hearty liking for their whisky – and from 1750, the popularity of whisky grew like never before. This love for the powerful dram also fostered a new industry, that of whisky smuggling – and the men and women who turned to the smugglers trade used the Highland trails to their advantage, and they defended them with their blood.

Tales of the hated Excise Man

To be the Excise man, the man who hunted down the illegal traders of whisky, was to be the most hated man in Scotland. During a skirmish in Campletown, a region renowned for illicit whisky production, George Arthur of the Excise was killed by smugglers. In Strathglass an Excise officer also met his death, being thrown down a 100 foot ravine after his horse was put to flight by smugglers intent on keeping their loot. In Stirlingshire a mounted Excise man was to vanish (presumed murdered by smugglers) as he patrolled the lonely Highland trails east of Loch Lomond.

Malcom Gillespie was one man who took up a position as Excise officer, entering the service of the Excise in 1799 at the ripe old age of 20. Not one to back away from his duty, Gillespie one day found himself confronting a group of four ‘notorious and determined delinquents’ after he had maintained his duty and seized their load of contraband (80 gallons of whisky).

The four set upon him and beat him to near death, only discharging his pistol and wounding one of their horses caused them to flee – but Gillespie was to never fully recover from this encounter. A year later, Gillespie was at it again, and found himself locked in a fierce running battle with the notorious smuggler by the name of Grants, who nearly decapitated him.

“An Excise officer met his death; being thrown down a 100 foot ravine after his horse was put to flight by smugglers intent on keeping their loot.”

In 1818, Gillespie and his troop of hired help were confronted by no less than 12 smugglers.  Captured, beaten and stripped of his sabre, Gillespie managed to free himself and fired at the smugglers with a pistol he had managed to conceal. He then attacked the rest and in the ensuing brawl ‘so savagely and tenaciously’ bit the hand of one smuggler that the group fled into the hills with his men firing in hot pursuit.

Unfortunately, the life of an Excise man was not a life rewarded. By 1827, after nearly 30 years of unflinching service and able to show nearly 50 wounds on his body as part of his tenacity, Malcom Gillespie was staring bankruptcy in the face. Desperate and at a loss to survive, he joined the ranks of the criminals he had worked against and tried to forge a number of Treasury Bills. He was at once found out and the Government he had served for so long was unrepentant; on November 16, 1827 Malcom Gillespie was hung for his crime – an Excise man no longer.

Many an excise man learnt to follow the refuse trail, the bi-product of illegal distillation, upstream in order to locate the concealed bothy or cave being employed by the smugglers. Some smugglers went to great lengths to avoid detection, diverting whole rivers in some instances to keep their den a secret.

One particularly enterprising Scot set up his still in the town’s clock tower, attaching it to a regular chimney. The scent of his brew was covered by the overpowering stench created by the legal distillery just down the road – crafty.

The rise and rise of illegal whisky distillation

In the later half of the 18th and early 19th century, the illicit whisky trade in northern Scotland was an important part of the local economic landscape. While over 1000 illegal stills were confiscated in 1782, this figure represents only 1/20th of the total number of stills that were believed to be in operation through the Highlands. One of the prime reasons for the sudden and rapid growth in illegal distilling, and the smuggling trade was that from around 1750 onward, ‘this drink of some regions in the north, became increasingly acceptable to consumers elsewhere’. 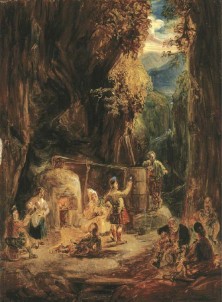 According to Dr Devine, of Scotland’s Strathclyde University, ‘By the 1790s, Gin and Brandy were no longer in much demand in the western Lowlands; whisky had taken their place,’ and by 1800 whisky had become the principle drink of the social elite – for one reason in particular its growing availability.

The other traditional drinks of Brandy and claret that usually entertained the social hierarchy in Scotland were, around this period, also feeling the ills of patriotic anti-French feeling. The Napoleonic Wars interrupted trade, creating ‘vastly inflated revenue demands’ on product prices and creating increased incentive for Scots to cheat the system. As a result, according to Devine, an opportunity was thus opened for a high quality Scottish spirit to capture the Scottish market.

From around 1786 taxation on spirits was relative to the size of the still, and licences to distil were issued on a ‘scale based on the potential production of the unit’. The ‘Highland Line’ was also introduced in order to try and regulate the whisky trade, and tried to restrict whisky from the north being transported into the Lowland markets.

Taxes were also levied at the amount of malt used in the distillation process and as a result of this, in an attempt to lower their costs, many registered producers sought to introduce large amounts of un-malted raw grain into the production process. While this was certainly cost-effective, the converse effect was a sharp deterioration in quality.

The illegal distiller bore none of these costs, and could thus make a dram more approachable in taste. In 1798, an innkeeper in Perthshire noted that ‘his customers were happy to pay double for illicit spirit rather than imbibe the increasingly unpalatable but legal product, which did not agree with their stomachs’.

There is also evidence from the 19th century that suggests illegal ‘northern’ whisky was fetching higher prices than that of legally distilled whisky on the Lowland’s markets – proving that certain consumer groups were happy to pay for quality.

The growth of the illegal industry can be measured against the rapid reduction in licences issued throughout Scotland. For example between 1797-1817 there were no distilling licences issued in Campbeltown, yet there were hundreds of illegal stills known to be operating in the Kintrye region. Illicit stills were also found to be in operation on the sites of current distilleries such as; Cragganmore, Ardbeg and Lagavulin, to mention just a few.

In 1828 Major General Stewart of Garth had commented that; “In smuggling, there is a spirit of adventure and hazard which has a charm for the minds of the peasantry – a sense of fraternity is produced among them by sharing a common danger”. It is true that the bands of countrymen involved in illegal whisky production certainly would have felt a common link to one another and worked hard for their common trade; however whether it was a trade they pursued because of ‘the charm of hazard’ is another matter.

Throughout the 18th and 19th centuries, the general life and existence of the Scots was harsh and cast with poverty – illegal distillation gave them an opportunity to beat the odds and a number of smugglers were able to retire to country estates and live out their life in relative luxury as a result of their illegal occupation.

By 1760 whisky was being consumed at breakfast by the upper and middle classes, and was beginning to challenge other more fashionable spirits as a after-dinner drink.

By 1800 the spirit was a regular in the punch bowl that according to Steve Sillet; ‘it was being introduced into the punch-bowl at the rate of half a pint per head’ – although gin and brandy were still preferred at gatherings and farm feasts.