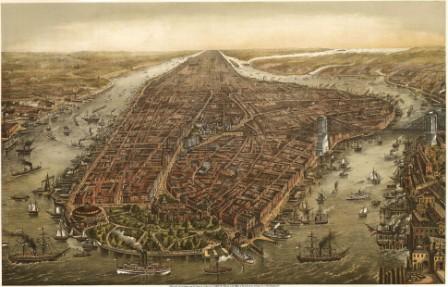 The full version of this story was published in the August issue of Australian Bartender magazine.

God, I love this town! I wish I could live here for a few months each year, as a few days is just not enough to do anything but just scratch the surface of this great city. I would go as far to say NYC is the most exciting city in the world with the best of everything – especially when it comes to eating and drinking. It’s been four years since my last trip here and in that time what’s obvious to me is that the city has returned to being the cocktail and bar Mecca of the world, putting London in their shadow once again. Here is a few must-see places to visit if you find yourself in the Big Apple. 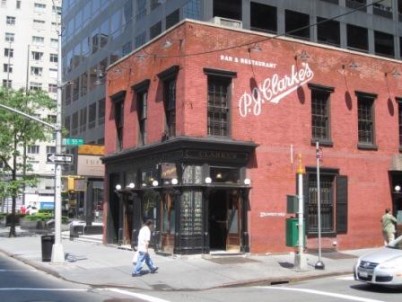 For over 127 years this New York institution has been a favorite watering hole for people from all walks of life. If you’re sitting at the bar chances are you will be greeted with a smile and a handshake from their bartenders who go out of their way to make you feel comfortable. The best way to describe this joint is an old school Irish saloon that’s jammed packed with history and charm. Just take the mens’ toilets that are positioned right in the middle of the bar!

TIP: I’m told this is the place were Old Blue Eyes and his crew would always finish their bar crawls when visiting Manhattan.  They also have a popular restaurant out the back called Sidecar plus an oyster bar serving up “West Coast”  – good match for a pint of Guinness. 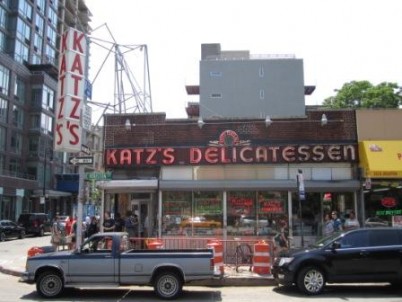 This is THE Kat’s that been covered to death by any and every travel writer and blogger since the dawn of time. This is also the place that that every article just has to mention where yes that famous orgasm scene was filmed in When Harry sandwiches Sally. But here is the truth and to back up my fellow writers ‘this place is that good’ and thousands of people seem to think the same every week. Back in 1888 a Russian immigrant family opened a delicatessen to cater to large number of immigrant families also living on the lower east side who longed for a taste of their homeland.

TIP: The craft of curing, smoking and pickling meats was extremely important back in the day for prolonging food in the age before refrigeration. I suggest their signature Pastrami on Rye that is out of this world delicious!

This place was suggested by New York regular and former vodka professor, Mr. Jacob Briars. I’m glad I listened to him, as I will go on record to say the Ace Hotel is the best hotel I have ever stayed in and great value to boot. It’s all very retro with my room having fun stuff like a Smeg fridge. It’s just those simple little things that set this place apart.

The hotel is packed with young and hip travelers (not really catering to the family traveler) with money to spend and who want something edgy and less stuffy than usual. I had an actual espresso (and was well made) coffee down stairs at Stumptown Coffee Roasters plus enjoyed a few good meals at their ground floor restaurants one being their seafood place called John Dory that has their cocktail list created by Sasha Petraske of Milk & Honey fame. Then there is the impressive Scottish hunting lodge inspired Breslin Bar & Dinning Room (named after what the old hotel use to be back in the day) that embraces “nose to tail” cooking that is heaven for an offal fan like me.

Both restaurants are owned by the same people behind The Spotted Pig restaurant on 11th street that has built up a cult following amongst serious foodies and chefs alike. The Breslin was also just listed as one of the “ten best tables” by the New York Post. Their cocktails are mostly all priced at the affordable $12 too. Anyway I didn’t plan to review any hotels but the fact is this place is so much more than just a few rooms and staying here you just can’t go wrong. 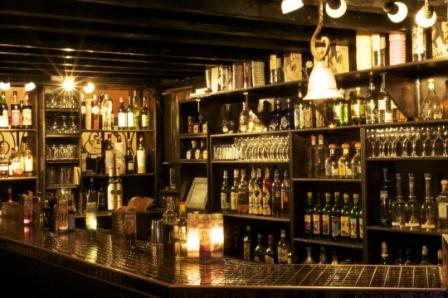 This non-descript Mexican bar and restaurant once inside is a cosy shrine to all good things from south of the boarder. Only the best Tequila and mescal you will find and absolutely no mixo or crappy burritos on offer from these passionate folks who it seems are on a mission from god to educate as many who will listen about the joys of this fine agave spirit. Their cocktails are also very impressive with “flight to Mexico” giving punters the chance to sample up to three different brands from different styles including Los Altos, Tres Agaves & El Entidido. Another is their drink to share with amigos the “Punch-O-Villas”. 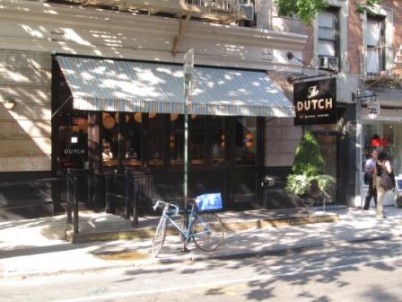 The Dutch is fast paced restaurant that comprises of a front dinning area with an oyster bar, a more exclusive back area that has darker tones along with a fireplace for those colder months. Plus I’m told there’s a private 20-seat basement dining room as well. The bar is situated in the front dining area and even at 5pm on a Monday afternoon this place was packed with drinkers all having a good time. My Negroni was perfect as was the big blocks of hard ice used in most drinks. One thing I love about New York is their love for oysters and everywhere from an old school saloon to the hottest new American Nouveau restaurant like The Dutch.

TIP: The Dutch serves their oysters freshly shucked for about $3 a pop so make sure you bring your appetite. 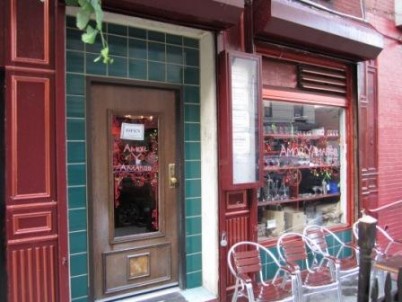 I stumbled upon this place and I swear if you blinked at the wrong time you would miss it. At the time of writing this in, late May, this small bar come bitters tasting room was only eight weeks old but no doubt gaining a local following. One of the key reasons for opening this ‘neighborhood bar with an agenda’, as explained to me by co-owner Avery Glasser, was to create a general store for their Bittermens Bitters as well as enlightening more people about the versatility of bitters.

Avery informs me that Amor Y Amargo (Love & Bitters) is New York’s first bar dedicated to the wonderful world of bitters. They also won’t do any cocktails that are shaken or use fresh fruit preferring old the simple drinks that are built and stirred. Considering how popular bitters are with bartenders today this place is worth the visit as I’m sure you will learn something new from these passionate and bitter folks.

TIP: This pocket size gem is  only a few doors down from Death & Co so once you’re finished enjoying the love and bitters on offer you can head down the road. 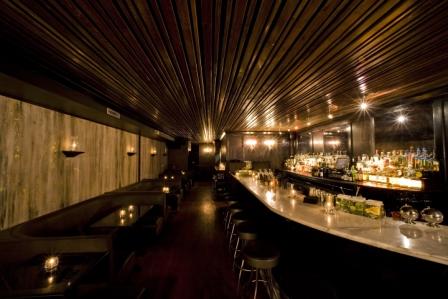 One of the city’s most popular modern day speakeasy’s; Death & Co is a perfect example of New York’s premier cocktail scene. The name came about based on how hard nosed teetotalers described non conformers during prohibition saying, ‘to drink alcohol was to live a life shadowed by death’. Once inside you will find a dimly lit room with a dozen or so seats at the bar and a few cosy booths along the wall and what is an extremely impressive back bar. I suggest you get in early if you want to get a seat at the bar as they don’t take reservations and from what I can see it gets busy very quickly.

What I like about their cocktail list is that it’s not over whelming and only ten plus pages long. Spirits categories are broken up into their top 3 or 4 cocktails with either shaken or stirred. Great illustrations accompany each page and it’s worth noting the drinks listed are all only $13.

TIP: They also have a tasty bar food selection and I can attest to their pork belly being ‘to die for’… don’t miss this place. 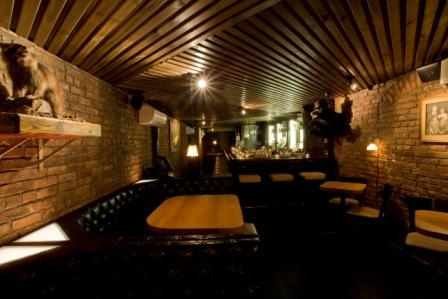 By the time I got to PDT it was my last stop of the night and also the final watering hole of my two-week Middle America and NYC bar crawl. To say I was exhausted and needing a major detox/diet would be an understatement but I had a job to do and the finishing line was in sight.  Before you even get into this little speak easy you know you’re in for something different as you can only get in via a phone booth in a hot dog shop and then if they like what they see the door inside the phone book will open. Very “Get Smart” in a fun way but also very clever.

The bar is where you want to sit and only a dozen seats wrap so making a reservation is essential to get in and get a seat. It goes without saying that the drinks are perfect and you have to try one of their signature cocktails the “Benton’s Old Fashioned” created by Don Lee in 2007 it is fat infused bourbon with maple syrup and bitters. Chatting with owner and head bartender Jim Meehan he ran me though this new cocktail book that he has coming out in October that outlines all their famous cocktails, setting up a home bar. I was lucky enough to get an advanced copy and have to say it looks fantastic.

TIP: Dave Wondrich did the forward for  Jim’s book, and describes it as “a book that perfectly encapsulates what we drink in bars today in a way that is both timelessly elegant and concisely and efficiently contemporary”. Well done Jim on what is sure to be a ‘must have’ book and of course one of the world’s best cocktail bars.

0
Australian Bartender August 22, 2011
No Comments Yet

Happy Birthday to us!

My problem with pushy cocktail comps