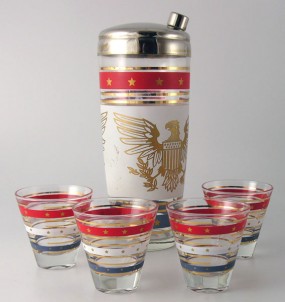 This article featured in the August edition of Australian Bartender magazine.

David Wondrich is hosting as exclusive, ‘hands-on’ cocktail workshop at theLoft on September 12 – click HERE to download a booking form. You can also catch him at Sydney Bar Show Weeks‘s Mixology theatre and the Talks & Tasting theatre.

Head to www.barshow.com.au right now to register and purchase a 2 Day Theatre Pass.

Write-brite*-brine-brink-drink. With just three little words separating them, it’s no wonder those two verbs tend to keep close company. If it would be a gross exaggeration to say that every writer is a tippler, few would disagree that taken as a whole the profession has never been averse to “moistening the clay,” as Dickens would say. (Dickens’s drink of choice? Rum Punch.) Not that every drinking writer is alike, though.

In fact, based solely on their literary product, we can divide them into two distinct schools: the Utilitarians, whose interest in drinks begins and ends with their physical effect, and the Epicureans, who immerse themselves in the art and ritual of it all.

There’s no better exponent of the Utilitarian school than Dashiell Hammett (not coincidentally, a Vodka Martini man). Now, nobody could possibly mistake his books for temperance tracts; they’re as wet as wet can be.

And yet-well, consider this bit from The Thin Man, in which Nick and Nora, their client and a couple of mugs are conducting business in a nightclub: “The somewhat hunchbacked waiter Studsy had called Pete pushed through people to our table and grinned affectionately down at Morelli. ‘What’ll it be?’ We gave our orders and the waiter went away.”

As a former English professor, I can admire this passage for being terse without fading into dullness. As a cocktail fiend, however, it leaves me unsatisfied. What did they order? Martinis? Scotch Highballs? Pink Ladies for the mugs and straight rye for the others? I want to know. I think it makes a difference.

There’s no better exponent of the Utilitarian school than Dashiell Hammett (not coincidentally, a Vodka Martini man).” David Wondrich

Thankfully, I’m not alone. With names such as Dickens, O. Henry, Ernest Hemingway, and Ian Fleming, the Epicurean school is well represented. These are folks whom you can count on to tell you precisely what everybody’s drinking. Some will even go so far as to provide mixing instructions, just so there’s no room for doubt.

Take for example the master humorist P.G. Wodehouse. Along with matchlessly silly dialogue, micron-tolerance plotting and a refusal to let any hint of sordid reality intrude on the pleasant world his characters inhabit, one of the characteristics of his vast body of work is an exacting precision whenever the subject of strong drink arises (which is pretty damn often).

There’s no better example of what the Epicurean school can do than the passage from his 1928 story “The Passing of Ambrose” where Ambrose Wiffin, having just squeaked out of a sticky social situation, turns to “sketching out in his mind…the drink which his man, under his close personal supervision, should mix for him…. It must be a cocktail. The cocktail of a lifetime. A cocktail that would ring down the ages, in which gin blended smoothly with Italian Vermouth and the spot of old brandy nestled like a trusting child against the dash of absinthe.”

Here, at least, fiction and reality intersect: “Wiffin,” as we must call it, is as easy to reconstruct as if Wodehouse had inserted an actual recipe, and, once reconstructed, as sublime as any cocktail known to humankind. Now that’s writing.

* No, that’s not the IM spelling of “bright,” it’s the archaic English verb meaning “to become over-ripe and shatter.” This excellent Scrabble word usually applies to grain, but you could probably apply it to clever story lead-ins too. 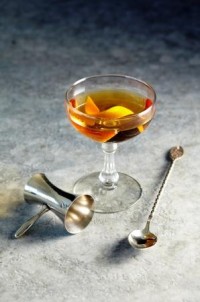 0
Australian Bartender August 24, 2011
No Comments Yet