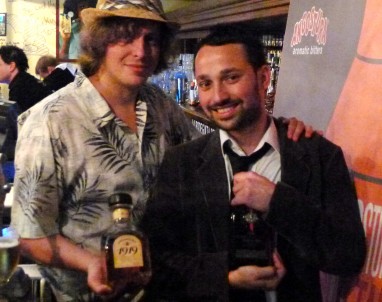 Australia’s leg of the global Angostura Cocktail Challenge is well under way thanks to a bumper turn out at the New South Wales state final on Monday night. Held at Sydney’s shrine to rum – La Bodeguita Del Medio – it was Rockpool Bar & Grill‘s Neilsen Braid who proved he can stomach his bitters with the best of them by shrugging off the other competitors to take out the state title.

The finalists were asked to prepare two creative drinks, enhancing an Australian classic – the Angostura lemon, lime & bitters and the second based on enhancing the flavours found in Angostura Rum and Aromatic Bitters, within a six minute window.

The first off five state finals, Monday night’s victory brings Braid one step closer to winning a trip to Trinidad to take on the world.  Before Australia’s representative can be decided, however, victors from the state finals will meet in a final clash of cocktailian creativity set for October 24.

You can catch the action at the Victorian state final this coming Monday (August 29) at Melbourne’s Byblos Bar & Restaurant from 7pm.