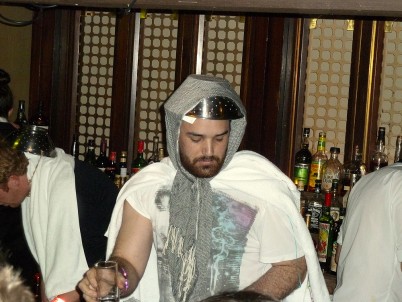 Congrats to the team from Black Pearl who managed to take the top spot by knocking-up a Punch and serving it in an umbrella!

Be sure to RSVP to all of Sydney BarShow Week’s official parties and events in order to avoid missing out.

The evening will take the form of  a Karate Kid style knockout tournament with 20 contestants (teams of two) from 10 bars having to make 10 classics (five drinks per bartender) from a list of 20 (without specs) drawn at random and announced to the contestants in front of the  rabid and baying spectators.

“The Coney Island Bartender Bumfight will showcase not only, teamwork and back breaking speed, but innovation and improvisation” says Victoria Room bar manager Lee Potter Cavanagh.”

Each of the five judges, comprised of local and international gurus, will assign the drinks a mark out of 10 to be held aloft, with the slower team losing a mark off their total for every 10 seconds they finish after the quicker team.

Bartenders will have to bring one crisply ironed $100 note per team to enter the comp with only one duo walking away with the cash – so if you’ve got the nerve to take on some of the best, then…come out and play. Visit the Facebook site for more information about how to get involved.

Head to www.barshow.com.au for more on this, and the many other official events taking place during Sydney BarShow Week.

0
Australian Bartender September 10, 2011
No Comments Yet

‘Movers & Shakers’ Dinner at The Winery