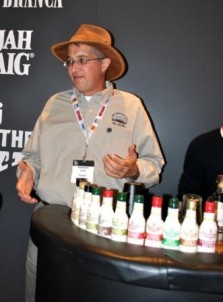 Fee Brothers is one of America’s great cocktailian family companies whose heritage stretches from before the Civil War to being the bitters of choice at a recent White House cocktail party. Joe Fee represents the fourth generation of this successful story and has been involved with all areas of its growth, from days sweeping the factory floor to seeing the company become an internationally recognised brand.

Australian Bartender magazine is excited to announce that Joe will be heading down-under for this year’s Sydney BarShow Week where he will be on-hand (at the Think Spirits stand) to chat about his products, his family’s history and convince you all why you should be putting more bitters in your cocktails.

When did the Fee Brothers story first start?

“The oldest piece of paper that we have with a date on it is a lease signed by James Fee on March 4, 1864.   While [the family] was doing things before that date, we just can’t put any documents to it.”

How long have you been involved in the family business?

“I was screwing on caps and sweeping the floor since I was six (my father believed in slave labour) and I have held my current position of Sales Manager/Treasurer since 1991.”

Any significant developments over the years Fee Brothers have been operating?

“Each generation has made changes that have kept us current with the needs of the time.  For my sister Ellen and me, it has been the development of products intended for high-end bartenders that ahs been most important.”

How important are bitters for the modern cocktail bartender?

“Bitters are your “spice rack behind the bar”.  You wouldn’t operate a kitchen without a spice rack.”

Have there been significant developments for cocktail bitters since the 19th century?

“In addition to resurrecting forgotten Bitters that were commercially made pre-Prohibition, we have brought the list of available Bitters much further.  Flavours such as Rhubarb Bitters and Black Walnut Bitters were not considered before.”

Tell me a little bit about the process of making cocktail bitters.

we, actually work with international flavour houses. They have the equipment appropriate for the extraction of flavours from various sources and once we have a flavour profile in our mind getting its components is fairly simple.”

What cocktail trends do you think are popular at the moment?

“One growing trend is the use of flavoured vinegars as the acid in cocktails.  Historically, vinegar has been used to make a shrub, which is a term that refers to a beverage      ingredient as well as the beverage itself. Shrub is a combination of vinegar and fruit.”

What do you hope to show Australian bartenders at Sydney BarShow Week ?

“I will answer the question, “Why in the name of God would anybody willingly put something called bitters into a cocktail and hope for a good resolution?” In addition, we will introduce our newest flavour, Black Walnut Bitters.”

“Bitters are your ‘spice rack behind the bar’.  You wouldn’t operate a kitchen without a spice rack.” Joe Fee, fourth generation Fee Brother

What’s the attraction of working for such a long standing family company?

“Seeing my name on the label as the product rolls off the line is very gratifying, and being the fourth generation of anything is so unusual these days.”

“Experience has helped me to move more decidedly and carefully. All the ways I’ve changed since I first started are so numerous I don’t think we have enough space in this article.”

“Taking Fee Brothers to the next level, the international level.”

“I can only reiterate that you must listen to your customers. My customers give me ideas every day – some of which I probably shouldn’t mention here.”

“Our continued global expansion. When I leave the Sydney Bar Show Week, having already visited         New Zealand and Tasmania as well, I am heading to the first ever bar show in Moscow.

If you had asked me twenty years ago if I would ever sell product in Moscow, I would have looked at you funny.”

What excites you about being involved in the international bar scene?

“The sheer enormity of it all. Not only are bartenders embracing mixology, but they are genuinely excited about it. This is a major improvement from years past where, at least in the United States, we had seen a general decline in the skills of bartenders.”

What are your Top 5 tips for running a successful business?