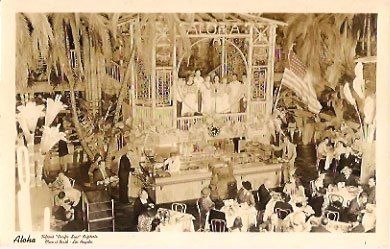 Few mid-twentieth century Polynesian pop potions come close to achieving the legendary status of the Zombie. And this potent potable has achieved cult status despite being one of the most mysterious mixes in the annals of tropical drinks. Created by the Tiki pioneer, Don the Beachcomber, this beverage is infamous for its intoxicating powers.

The mix on this page is certainly not the original Zombie served up by Don Beach during the 1930s era – but that’s no surprise since Don kept the formula secret even from his own bartenders. The barkeeps at Don’s restaurants had to pour ingredients from bottles only marked by numbers and letters – they only knew the right combination which is just one part of the Zombie code.

The recipe printed here is adapted from Jeff ‘Beachbum’ Berry’s Intoxica! – a must have manual for Tiki enthusiasts – and according to the author this formula is  one contributed by the Beachcomber himself for a 1950 barbeque manual. Appended to the recipe was this caveat from Don: “I have originated and have served this ‘thing’ since 1934… Anyone who says otherwise is a liar!! Signed: DON”.

*Add all ingredients into a shaker. Shake briskly with cracked ice and strain into a Collins glass or Tiki mug. Garnish with a pineapple wedge, a cherry, mint sprigs and half a passion fruit filled with 151 rum then ignited.

**One would do well to heed the Don’s second caveat: “One only to a customer.”

0
Australian Bartender October 7, 2011
No Comments Yet

Cesar’s Rum Punch: a 1930s era cocktail is the escape we all need right now