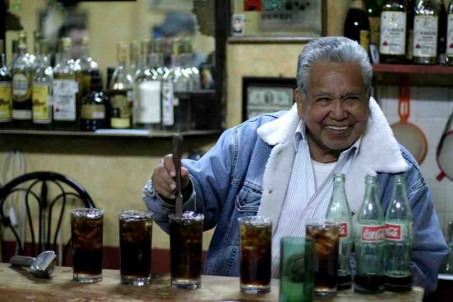 This Classic featured in the January issue of Australian Bartender magazine

Bartenders are always looking for the perfect quick Tequila serve, what many don’t realise is that they’ve been beaten to the post by an 88 year old bartender from the little town of Tequila in Jalisco, Mexico.

Don Javier Delgado Corona has presided over a tiny bar in Tequila, called La Capilla (the Chapel) for more than 70 years. Over time the man has become a living legend and his bar a place of worship for Tequila ‘true believers’.

“This is a true Mecca for those seeking the spirit of Tequila,” explains Tomas Estes, Bartender contributor, restaurateur and founder of Tequila Ocho. “…this is a no nonsense place – no frills. Don Javier stirs his drinks with a butcher’s knife, a fork or whatever is at hand.”

Don Javier’s creation, La Batanga, like his bar is a simple affair. Tequila, fresh pressed lime and cola served in a salt rimed glass. At La Capilla it’s made with a local ‘mixto’ brand, distilled only a couple of hundred metres from the bar, called El Tequileño. The El Tequileño company was founded in 1959 and Don Javier created his original Batanga recipe with El Tequileño Blanco in 1961.

As you’re unlikely to have a bottle of El Tequileño Blanco on hand I recommend that you go for a quality bottle of 100% agave blanco Tequila. Juice your lime straight into the salt rimmed glass, add a load of cubed ice a pour in a generous slug of your Tequila. *Rim a large highball with salt. Using a Mexican elbow; squeeze in the juice of half a lime. Add your Tequila, fill with ice, top with cola and stir with a large knife.

0
Australian Bartender January 24, 2012
No Comments Yet