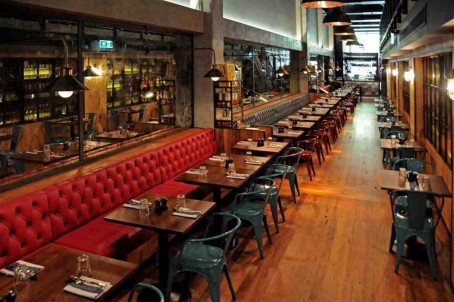 This new bar featured in the January issue of Australian Bartender

Jamie Oliver has landed and he’s bringing with him all the expected bells and whistles.  Inspired by the culture of laneway gastronomy and tippling Jamie’s Australian foray features antique coppers, earthy coloured tiles, leathers and blackened steel.

The venue features a fully operational pasta preparation station, which produces all the fresh pasta required while also satisfying the curious urge of onlookers. Jamie’s Italian also has an impressive bar area that turns out an array of delightful drinks, all under the watch of the 150kg tiered chandelier, which is suspended over head.

peckvonhartel was invited by the Pacific Restaurant Group to design Jamie’s Australian launch venue, and have managed to convert a seemingly obscure and narrow site on Pitt St into a bustling restaurant hub.

0
Australian Bartender February 22, 2012
No Comments Yet