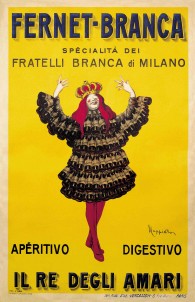 This feature appeared in the February issue of Australian Bartender

Written and researched by Edward Washington

How one savvy Italian kick-started a bartending cult

Now if you’ve missed it, I have a slight interest in history. Couple this with a fine passion for anything that’s undergone a stage of distillation or fermentation and you’re talking my language. But what of this month’s main charge – liqueurs, vermouths & bitters – how do they fit into the historic landscape of Australia?

Well it’s September 1877, Governor Hercules Robinson is in charge of NSW’s hotel laden colony and imports are flooding in.  On the 27th of the month a Mr G.B.Modini – interestingly one of the colony’s earliest Italian additions – ran a hefty notice in the The Sydney Morning Herald for what appears to be of the first time that Fernet Branca was available downunder.

‘Fernet Branca!!! Fernet Branca!!! What it Fernet Branca? …[it] is the delicious Tonic Bitter Beverage of illimited consumption on the Continent, the Indies, South America…[etc]. Stimulates the appetite, corrects the inertia and the stomach – promotes, cures spleen bowl complaints…invigorates the general system.

Testimonials received from Dr. Casati, Phys. of the principle Hospital of Milan, Dr. Francois Gemi [etc]….unfailing success both in preventing and curing the disease.

Sole Agent for the colonies. G.B.Modini.’

Now G.B. Modini was well known around Sydney at this time and held a shop (pictured right c.1890s) at no.610 George Street where he traded as a ‘Practical Gunsmith and Cutler’.

Boasting the ‘finest assortment of imported firearms and cutlery‘ Modini imported all manner of international rifles and kitchen wares. Colonial logs show he had been bringing material into Sydney since back in the 1860s, so he was likely to be well versed in what trends were swinging in the town. Modini looks also to have been involved in the running or ownership of the then named Royal Standard Hotel (cnr Clarence & Barrack streets) which was aptly renamed the Italian Hotel at some stage. 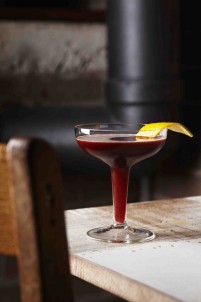 *Shake with ice and strain into a cocktail glass. Garnish with an orange zest.

His business at no.610 George was still thriving in 1880 when Doves set about making his maps of Sydney city and if you trace the map you can actually find his shop listed. It’s wedged between the Riley Bros. Drapery and Miss Deane’s Millinery.

Rest assured if you’d been down his way, wandered in and took a minute to peruse his goods G.B. Modini would have had the ‘best assortment of Sheffield Cutlery, breech & muzzle loaders, revolvers and ammunition to suit’ on offer – and Fernet Branca of course.

Come 1896 and Modini was still running newspaper ads listing himself as ‘sole agent in Australia’ for Fernet-Branca – of Branca Brothers, Milan. He had now held this position for 25 years and thanks to his hard work the Italian elixir could ‘…be obtained from all leading Hotels and Storekeepers throughout the colonies – [to be] taken mixed with seltz-water, wine, and coffee.’

Flash forward 120 years or so and Fernet Branca is one of the cult products in any bartender’s arsenal. Indeed if you held a straw-pole for cocktailians to find out what they’d take to a deserted island you’d have to think a bottle of Fernet would be a prominent choice. That and a crystal mixing glass, a ratty first edition copy of a 1870s cocktail book and their app. laden iPhone.

So how about it? Somebody create a cocktail in honour of  G.B. Modini’s hard work, vision and initiative. Give it a name and let me know how you do, the ‘Practical Gunsmith’ perhaps?

There. I coined it – now you make the drink.