Gary’s articles are reprinted with the kind permission of The San Francisco Chronicle. Check out more of Gary’s work at www.ardentspirits.com or contact him vie email; gary@ardentspirits.com

About five years ago, when I was conducting a bartender-training workshop, a certain Chad Solomon, then a bartender at New York’s Pegu Club, introduced me to the dry shake. It was a pivotal moment for me.

The dry shake – shaking a cocktail containing egg white without ice in order to properly emulsify the ingredients before adding ice and re-shaking – makes complete scientific sense, and any cook or chef worth his or her salt understands this. But very few bartenders understood this at the beginning of this century, and when Solomon brought this piece of methodology to my attention, I started to realise that the game was changing. 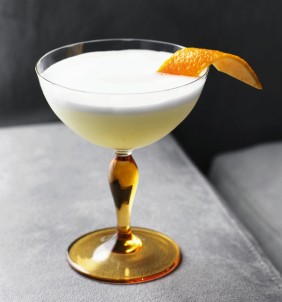 *Adapted from a recipe in Ted Saucier’s Bottoms Up, published in 1951.

Yes, many of the techniques employed by present-day bartenders are less than a decade old, and much of what is common today – homemade bitters and tinctures, for instance – were very hard to find prior to the dawn of this century. It’s a great time to be a creative bartender.

One of my favorite 21st century bartenders is Shawn Soole of Victoria, British Columbia, who I’ve worked with on a bartender competition in France for the past couple of years.

A recent e-mail from Shawn caused me to take a look at Ted Saucier’s Bottoms Up, a 1951 book by a guy who was once the publicist for the Waldorf Astoria hotel in New York.

Bottoms Up is very 1951 and contains a dozen saucy sketches of scantily clad young ladies, each by a different artist. It’s possible, I guess, that they frequented the Waldorf Astoria, and Saucier prevailed on them to help on his book project. But, that’s mere conjecture, of course.

The reason that Shawn drew my attention to this book was that a friend of his has recently reopened Vancouver’s Hotel Georgia, and they were looking for information of the hotel’s eponymous cocktail, a drink detailed in Bottoms Up.

The Hotel Georgia cocktail, as it turns out, is a tasty little dram that calls for gin, orgeat syrup, lemon juice, orange flower water and an egg white. It’s well worth the price of admission.

Poring over the methodology beneath the ingredients detailed in Bottoms Up, I was taken aback to read the following words: “Shake well before adding ice. This gives a nice ‘top.'”

Everything old, it seems, is new again.