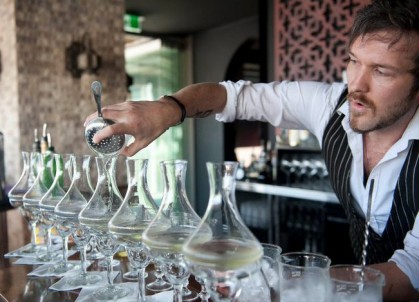 Fraser Campbell can be found tending bar at the Fitzroy hanut, The Alchemist. If he’s not there he might be refining his bottle opening technique, watching The Lost Boys or reading tips for the modern man in Man Up: Skills for the Modern Guy. If you catch him on his break, he’ll appreciate a pint of Negroni. If you get the chance too, then check out The Alchemist’s sweet website, it’s certainly worth a look.

“I’ve worked every weekend and some, more or less since I was eighteen.”

“Any time a customer goes out of their way to shake my hand before they leave, a true sign of appreciation.”

“The one that sticks in my head is a poorly executed uncorking of a bottle of red, resulting in a female customer who entered wearing a white dress, leaving looking like a Dalmatian.” 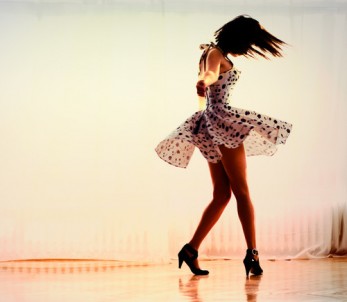 How do you prepare yourself for success in a cocktail competition?

“Determine what type of comp it is, either about the drink or the brand. Find out who the judges are, and bribe them. Failing that, find out what they like drinking.”

“First job in Oz was at Kit and Kaboodle, Sydney. Then first job in Melbourne was at Kitten Club (the non-stripping one) . . . well, depending which nights Andy Young was working.”

What’s your advice for a young aspiring bartender?

“Work as many different hospitality roles as possible. If you can make kick-ass drinks and work the floor like a premium product pimp, you’ll double your chances of getting a job, and get extra shifts.”

“Worked in a bar called Beluga in Aberdeen, Scotland with a bunch of my mates and my sister. We used to play the Cocktail soundtrack at weekends and we all had mullets in various colours . . . (See Fantasy Bar.)”

“Can’t wait to go back to Barcelona, Gaudi was a crazy mad genius of architect.”

“As a travelling man, it’s got to be Ramble On by Led Zeppelin.

“Punning. I’m going to campaign for a new Olympic category.”

A healthy dash of Rhubarb Bitters.

*Add all to a cocktail shaker, shake and strain over ice chunks.

“A bar in which nothing that was created past the 1980s exists. That means if you bring in a mobile phone, it better weigh 20kg and be attached to a red Porsche.”

“A pint of Negroni.”

“My granda who passed away 4 years ago, the longest serving firefighter in UK history.”

“Man Up by Paul O’Donnell. Including useful tips such as how to throw a punch and hold a baby. (Separately, of course.)” If you could have a superhuman power what would it be – why?

“Teleporting things anywhere by looking at them. Useful for heavy lifting and transporting any unwelcome and irritating punters into a pit full of angry badgers.”

“There is nothing a cup of tea cannot fix. And hopefully that would include whatever incident was about to make it my last drink ever…”