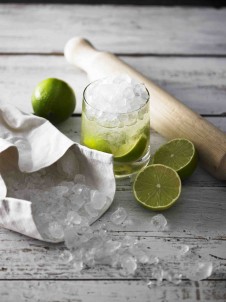 Cachaça, Brazil’s distilled tipple of choice owes much of its international fame to one drink – the Caipiriñha. It’s a stunningly simple concoction and when made well equally delicious. For a drink that outwardly looks so simple to compound, however, there’s constant debate about how it should be made and with what.

Many will insist a proper Caipiriñha should be made with limao casca fina, limon de pica, or what you’d probably better know as Mexican or key lime. This type of lime – endemic in the Americas – is touted to be smaller and more fragrant than the Tahitian lime found in Australia, but once doused in a couple of ounces of Cachaça it’s unlikely anyone will be the wiser for your substitution.

The next item ingredient under fire is always the type of sugar. Refined white castor sugar is the type used in Brazil but it’s common for raw sugars to be used on Australian shores. There’s certainly more favour to be found from raw sugar, but it can also ‘muddy’ the flavour of the drink if you opt for something too strong. There is also no harm done by using sugar syrup. No, it’s not traditional, but its use won’t affect the flavour of the drink adversely – in fact you’re more likely to produce a consistent drink.

You might have also heard the Brazilian adage: ‘quanto pior cachaça, melhor a Caipiriñha‘ – the worse the cachaça the better the Caipiriñha. Well, I for one don’t buy this – while you’d be inclined to stick with an un-aged cachaça – a clean quality spirit will produce a superior drink to moonshine any day of the week.

Finally there’s some debate about whether this drink should be shaken or simply built. In Brazil it’s built in the serving glass, but then a shaker is fixed on top and given a whirl before being tipped back into the glass. The ice used is cubed, cracked or whatever they have on hand – never has crushed ice been a traditional ingredient for this drink.

The recipe following combines traditional methods with some modern adaptations:

*Muddle lime wedges in the base of a shaker – they don’t need to be pulverised as this will release bitter oils. Add spirit and syrup. Add one scoop of cubed ice (enough to fill a rocks glass) and shake briskly. Pour into a rocks glass and cap with crushed ice.