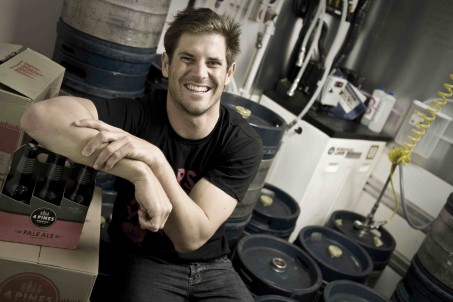 “For me [a craft beer] is defined by process – not so much size. The process of craft brewing is time consuming.” Jaron Mitchell, 4Pines, Manly

When the craft beer history books are written, Jaron Mitchell will be one of the favourable heroes who helped revolutionise the Sydney beer landscape. After a throw away line from his dad, who lamented the lack of good beer in Manly, Mitchell set about establishing 4Pines, a community focused craft brewery. It’s now a nationally recognised brand, and doing wonders for our palates. We caught up with Jaron for a chat good beer and how he ended up running a brewery in Manly.

So, how’d a WA boy end up running and owning a micro-brewery in Manly?

I studied in Perth and came to Sydney to do a real job – in the city with a suit and all that – and I hated it. I’d been living here for about two and a half years, and my old man was over here for a visit. We went for a surf and then went for a coffee and a pie and Dad asked where we get a good beer now in Manly. This is back in 2006 remember, so I don’t think you could get a single craft beer in Manly, I’m talking either bottle or keg, and I said quite simply that you couldn’t get one. He suggested that there should be a micro-brewery in the area then we got a bit carried away with the idea and six years later here we are.

I’ve learned that everyone that needs you at that time, doesn’t need you exactly at that time. If you spent your life kneejerk reacting to everyone that ‘needs’ you at one point or another you’d never get anything that you’ve done. I think any small business owner goes into their own venture thinking that they’ve got to be working 100 hours per week to get the momentum, but it took us a long time to realise that we didn’t have to be doing this, and sweating on all the small things.

Where would you like 4Pines to be in the future?

Let’s start with five years; you can now get us nationally but most people still wouldn’t have a brass razoo of an idea about us, so I’d say to have a strong national footprint and to keep being true to ourselves the whole time, even if that means making costly and timely decision to do so – to keep the integrity in what we do. I think that’s the beautiful thing about being a small independently owned brewery. We don’t have the pressures from external investors wanting pure return on investment.

The new brewery that we’ve just taken on is an expensive thing, so for the next five years we will really want to consolidate. There’s a bit of a misperception about the craft industry; consider that craft takes a bit of 2 per cent of the beer market and of that about three quarters is Little Creatures, Matilda Bar and James Squire so there’s 150 of us who have about point five per cent of the Australian beer market – and the reality is that no one’s making money at that level. For us the next five years will concentrate on paying off that brewery and keeping everything under control.

Ten years down the track I’d like to think that we’re in a position to be profitable enough declare a dividend and give everyone a pat on the back for the overtime and hardwork. But we didn’t go into this to make lots of money; we went into it to make better beer.

I’m very mood driven, but most of the time I’m drinking beer I’d be drinking a 4Pines Pale Ale. Favourite non 4Pines; the Chimay range are fantastic but hands down, it has been for years and I always try and have one close by (but it’s hard to get) is the Aventinus Weizenbock.

What is a craft brew and what are the challenges of being in the craft industry?

For me it is defined by process – not so much size. The process of craft brewing is time consuming, you’re using expensive ingredients and your beer needs to mature for longer.

A challenge for a big brewer, who is involved in craft brewing, would be the mix of maintaining operational efficiencies with different shareholder expectations of the product and keeping as true as possible to the principles of craft. The biggest challenge for all of us (craft brewers) is to maintain your business model so that you’re able to maintain, not necessarily a profitable brewery, but a brewery that’s not running at such a big loss and to be able to work forward. The scalability of the craft brewery is a challenge. For example in the wine industry if the wine you make is three times as good then it commands ten or fifteen per cent more – there’s not that so much (with beer), it’s still looked at much more as a commodity so there’s not the direct reward for improvement.

How have attitudes toward craft beer in Australia changed over the last few years?

If you look at venue tap contracts, which are usually about three years and seem to govern beer distribution around the country, there’s a trend happening at the moment where a lot of guys are going back to the big guys saying that they want a bit more flexibility with their taps and they want craft. You’ve only got to look at the places around the country that are doing well, and look at what they’re offering, especially with what they’ve got on draught. For a pub that’s where the volume is and where margin is and it’s kind of being consumer led – there’s a ground swell of consumers who are asking for more variation.

What impact have big breweries had on the Australian craft market?

My understanding from what I’ve heard is that they saw the impact of craft beer in the US – Samual Adam and Sierra Nevada for example – they saw it in the UK and they thought ‘we’ve got to smother this market quick smart’ and with their existing on-tap contracts they could strategically place their products around the country.

Australian’s in general will still often not have a clue that the commercial beers they’re ordering are lager, lager and lager, and so inadvertently by using this ‘blocking’ strategy the big brewers have actually opened up that little door in the consumer’s mind to ask ‘what’s the difference in style?’ – this has also required some selling and consumer education [by the brewers]. While I think for the last 2-3 years and possibly for the next 2-3 more the market will remain thick with the bigger guys blocking it up, lots of little cracks will begin to form. You’re already hearing from publicans these days who will only sign up 50 per cent of their taps (with commercial beers) because they want freedom to be flexibility.

So I see their impact as a blessing. Had it stayed very generic there wouldn’t have been that bridge for us to get into the market so easily. We [the craft brewers] can ride on that coat tail.

The craft brew industry in Australia – does it need more regulation, or can it manage itself?

I think at this stage we’re all our own foot soldiers  – any (craft) brewery that’s ticking on well at the moment has someone in that brewery, an owner, a senior in the business or the brewer and they’re actually out there talking to the public. So I think that because right now there’s not multiple layers between what the beer is and the consumer I don’t imagine the industry will implode right now if you don’t have it; don’t get me wrong however, eventually it would be really nice to have.

I think the fear at the moment, for the guys in the industry who really want to tighten it up, is that the broader public aren’t that educated and that really good marketers might be able to come in, bamboozle the general public, and take away the essence of what the craft brew industry really is. From a 4Pines point of view we’re very much in a head down point of view – but we’re doing a lot of talking and educating for the consumer and we’re pretty happy with how the end message is getting through.

What’s the best thing about owning your own venue?

Absolute control and flexibility with what’s on tap and the range of awards and industry recognition we’ve won for our beers. We’ve definitely ticked the box that there’s now a good beer in Manly, and that now bars have our beer on tap and in bottles. To be running a venue that has been pretty highly regarded with awards and is recognised for what it does on a national level. We wanted to create a warm, down to earth venue – a place that feels like you own lounge, where the barman knows your name, and to give that real sense of community – I think we’ve absolutely nailed that. We get tourists in here shaking the bartender’s hand and we’ve got locals that come in here every night and we give them a little clap out at the end of the night. People keep telling us that we’ve changed the face of hospitality in the area and the venue is a real part of the local community. Also, not just from a customer point of view, but seeing your staff grow as well. To watch them grow and evolve into their roles over time and watch them become a little point of difference (within the venue) and be an extension of the owners, that’s fantastic.

Finally, what do you say to people who say, ‘I don’t drink beer’?

I first of all ask them what beer they’ve had – and you get the usual offenders. Then I ask if they drink wine and they say yes, so I’ll ask if they drink cask wine and they say absolutely not. So then I’ll take it back to the grass roots level and tell them that what they’ve probably tried is comparable to cask wine. Then I walk them through the wine world, then the beer world and very quickly we get them started. If they’re at the venue I’d say that most people land on a Kolsch or land on a Heferweizen – you know a lot of them actually land on a stout. Girls especially take to beer, I think because at a young age they decided that mum drinks wine and dad drinks beer, so I’ll drink wine.