This Internationalist article featured in the June issue of Australian Bartender

The first ones were amazing.

I can remember seeing Dick Bradsell talk about making cocktails at London Bar Show a decade ago; a few years after that, a decidedly stressed-out looking Sasha Petraske made two of the best points I’ve ever heard made in any seminar, anywhere*. There weren’t so many shows back then – just like there weren’t so many bars making decent cocktails – so half the thrill was looking to your left and your right in the audience and seeing some of the best names in the business listening raptly. Seminars then were always full, and almost all were good.

I’ve spent around the best part of two decades teaching seminars myself, on behalf of drinks firms in seventy countries or so. It was – and is – sweet deal: business-class flights, fancy hotels, fawning PR agencies, distributors happy that they have something shiny to show the local bartenders. In the beginning, it was pre-Internet, pre-bartender magazines, pre-bar shows, pre-cheap-flights. Coming to a seminar was just about the only way for a bartender to learn what was being done abroad, short of hopping on a plane. Drinks firms cottoned onto this quickly, and began flying bartenders around willy-nilly. One year I visited 38 countries. Seminars in bars, in hotel conference rooms, on beaches and at resorts; seminars for bartenders, for owners, for F&B managers. Rammed, every one.

“Back ‘then’, seminars were always full, and almost all were good.”

Anno 2012, seminars are dying. The good presenters are over-exposed, turning up at every bar show, so busy that they don’t have time to develop new content. Pre-Internet, this didn’t matter. As a roving trainer you could simply lecture in Country C about what you’d learned about in Country B while teaching the bartenders of Country B what was going on in Country A. But nowadays a new technique is invented in New York’s Lower East Side on Tuesday, experimented with in Melbourne on Wednesday, perfected in Berlin on Thursday and being done ironically in east London by Friday night.

With the hyper-speed messaging and viral information spread of Twitter and Facebook, bartenders don’t need information anymore: increasingly, what people are turning up for is entertainment and charisma. Anecdotes instead of recipes. Emotion instead of knowledge. And trophy-hunting, touching the beard of Wondrich or, to use the words of Eric Alperin, himself a raconteur of note, “wanting to see the monkeys in the cage”. King Cocktail himself, Dale de Groff, has designed a musical one-man-show, On The Town, which uses his singing voice, guitar accompaniment and a Powerpoint to explain the evolution of saloon and cocktail culture in the US to a ticket-buying audience. It’s superb.

Getting more than a dozen bartenders to come to an old-school seminar, though – you know, two hours, daytime, Monday to Wednesday, in a bar, with a tasting and maybe a contest or a goodie bag – is increasingly unlikely in major cities, because good bartenders in top bars are besieged with invitations to such seminars on an almost daily basis. I know of brand seminars in London that are disguised as market research or Bartender Panels, and that pay attendees 60 quid each to come along, as well as travel expenses.

The market for branded education has polarised: it either has to be an all-singin’ all-dancin’ balls-out mega-bucks seminar or ultra-personal: brand ambassadors who come to your bar during opening hours, have a drink and a chat and let you know a few key points about how the brand’s made and why it tastes the way it does, maybe with the odd photo being shown on an iSomething.  I like this. Anything that gets more people drinking in bars, albeit with a little brand education thrown in, is A Good Thing. 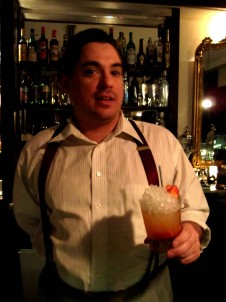 No. 1: We exist to be of service, not to make drinks. Sasha told a story of stepping outside Milk & Honey for a moment and seeing a member of a group drinking inside, vomiting on the pavement. Sasha helped the guy. Got him back inside through the back entrance so his friends wouldn’t see him and helped him clean up so his friends wouldn’t know, then went outside and cleaned up the vomit. That, Sasha said, was “being of service” in a way that making a cocktail will never be able to match.

No. 2: The difference between ability and execution is character. The group of people who can make 200 exquisite cocktails every night is far, far larger than the group of people who will make 200 exquisite cocktails every night – who, when, at the busiest moment of the evening, they reach into the freezer for a frozen glass and the glass they pull out is only a little cold, will put it back in and reach back in the freezer, all the way to the back, to pull out a full frozen glass. Character.

This Palma Fizz is a Moscow Mule update with a kick