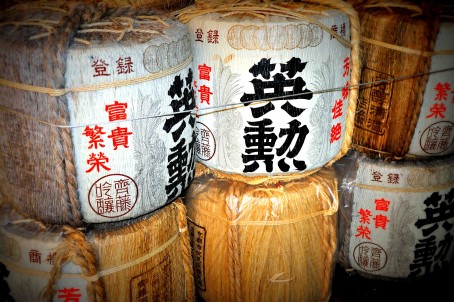 This April, I was lucky enough to join my good friend and business associate Mr. Bungo Horibuchi, Japanese Exporter extraordinaire and President of Kobe Foods, on a brewery tour extravaganza. We prepared ourselves (and our livers) to tackle five breweries on four islands in five days. It’s a tough job but we were up for the challenge.

Koji: Aspergillus Oraze, a mould that converts starch to sugar

Koji Muro: A room in a brewery dedicated to propagating koji mould

Moromi: A stage of sake brewing

Yuzushu: Sweet and tangy liqueur made from yuzu fruit

It’s Monday morning at Kyoto station when I step off the Shinkanzen from Tokyo. The ‘Nozomi’ high speed train clocks about 300km per hour so it takes just over two hours between the cites, which is enough time for me to enjoy my gourmet bento box and take in the rapidly passing scenery.

Saito Shuzo, a multi-award winning sake brewery in Kyoto, produces Sake under the brand name Eikun ‘Hero’ (pre-1915 it was known as Ootaka ‘Big Eagle’). For the last 120 years Saito Shuzo has produced nihonshu (sake), and award winning sake at that. Their Kura holds the high honour of being one of two Kura in Japan to have won gold medals for its sake 14 years running at the National Japan New Sake Competition. Despite these successes, and a century-long production, Saito Shuzo brewery is still a relative baby in sake production terms. 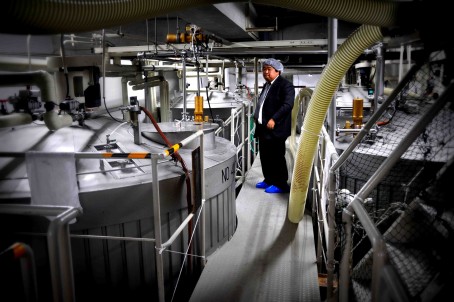 Saito Shuzo uses a vertical production style where rice is elevated to the fourth floor of the Kura, and each process brings the finished product closer to the ground. This makes a lot of sense: gravity is cheap when you are shifting your raw ingredients. Whilst vertical brewing is now relatively common in newer brewery setups, it’s progressive thinking when compared to the traditional horizontal layout (this methodology is also used in wine production, see Bartender April, 2011).

It’s obvious that Saito San is an innovative and forward. Many new production techniques and equipment are being used. I notice what I thought was a brand new koji muro, it’s stainless steel walls glistening in the light. It was actually installed 15 years old but its sparkling condition is explained as I look around the corner to see a crew of Kurabito polishing and cleaning the walls of this Koji temple. Juxtaposition this are some old metal containers nailed to the roof of the outer passageway, they are old koji containers, maybe placed there by some kurobito or toji as some token of appreciation or offering.

Whilst Saito Shuzu seems quick to embrace the new, there are certainly elements of tradition that remain. We round the corner where I witness a kurobito carefully measuring a dark liquid into containers – it’s fruit tannin, mainly derived from Persimmon. It is commonplace to use activated charcoal to remove impurities in sake. Solids and off colours are drawn out of the sake by the charcoal and sink to the bottom of the tank. Fruit tannin serves the same purpose but can definitely be filed under ‘old school’. I was intrigued and my initial response was to ask, “Doesn’t the tannin itself, discolour the sake, it’s so dark and rich in colour?” The kurobito smiled and said, “Yes, if you get the measurements wrong and put too much in, then you are in trouble!” Now I know why he was measuring his pours so carefully!

We visited the tanks next (always my favourite part of any kura tour) and there were some final batches happily fermenting away. Takagi San busies himself searching the surrounding area, I secretly hope he’s looking for cups and my prayer is answered. We taste the Moromi from the older brew. It’s effervescent, alcohol laden milkiness sets my mouth alive, the enzymes, racing across my tongue – I always consider myself lucky when I get to taste nature truly at work.

This is a good segue to get down to some tasting and we head to the tasting room. A good range of Eikun products are laid out before me, not only sake but some of the liquors Saito Shuzo produce too. The Eikun philosophy in sake style seems to be soft and feminine and I can appreciate why they are constant award winners. Smooth, light and delicate definitely seem to be the hallmarks here. Takagi San feels that the Koto Sen Nen Junmai Daiginjo best personifies the Eikun soul. I was also very impressed with the liquors produced too, especially the You’s Time Yuzushu, which is one of the better Yuzushu’s that I have tasted.

Hurtling south on the Shinkansen, Horibuchi San and I are enjoying the plush splendour of the new ‘Sakura’ service to the far south west of Japan. Kagoshima is Shochu Country and our destination is Hamada Shuzo, one of Kagoshima’s main producers of Shochu. They’re particularly famous for their Imo (sweet potato) Shochu called Kaido, so it is sure to be a wonderful experience.

The distinctive Red Kaido bottle graces the shelves of many good Australian bars. The red bottles stands for celebration and represents the setting sun and Mr. Yuichiro Hamada, the President of Hamada Shuzo, explains that the name Kaido also has a deeper meaning. In 1865, feudal warriors from the Satsuma region went to Europe to study how to set Japan on its way to becoming a modern nation. At that time, Japan was a closed country and the government did not allow its citizens to travel abroad. These brave warriors went to Europe at the risk of losing their life. Kaido honours and celebrates that achievement. 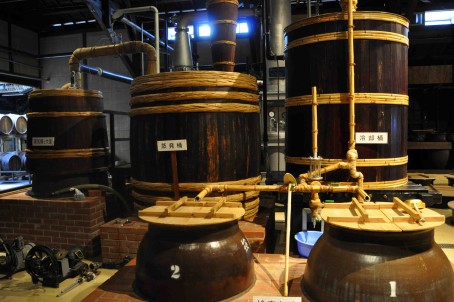 There are approximately 600 shochu distilleries in Kyushu, 111 are in the Kagoshima prefecture. Hamada Shuzo produces around 10 different styles of shochu but here in Australia you are most likely to come across the Kaido (sweet potato), Kakushigura (barley) and Shironotakumi (rice) brands. Shochu is usually bottled at 25% abv but you can find stronger.

The history of shochu is believed to have started around the mid 1500s. Distillation knowhow hit Japan in the north, originating in Persia (as Arak) and crept east through India and China. In the south it came from Thailand, up through Okinawa (as Awamori) and into Kyushu around the mid 1600’s. Shochu has enjoyed highs and lows in popularity amongst Japanese drinkers. Originally seen as the drink of choice for old men, it has worked wonders in changing its image. The first Shochu boom was during the 1980s and the second wave hit with the new millennium. By 2003 shochu sales surpassed sake for the first time in history and this rising popularity prompted distilleries to focus on premium quality, small batch runs and ageing.

Shochu can be produced using single (otsurui shochu) or multiple distillation (korui shochu). Single distillation is recognised as the premium method, allowing the character of the raw ingredient to shine through. To differentiate it from the korui method, the otsurui style is often referred to as Honkaku Shochu, or ‘authentic’ shochu.

Shochu production begins with a two-part process, preparation of the koji and preparation of the raw ingredient. This involves the propagation of aspergillus mould onto rice or barley that has been soaked and steamed. The enzymes of the mould break down the starch in rice or barley into simple sugars so they can be fermented into alcohol. The inoculated koji is added to a tank of water and yeast to begin fermentation that lasts for approximately a week. The raw primary ingredient (sweet potato, rice, barley, corn, soba etc.) meanwhile has been washed, steamed and macerated. Then comes the marriage, the fermenting mash is blended with the raw ingredient, more water and yeast added and left to enjoy a two week fermentation party. The final moromi is then distilled, aged, diluted, and bottled for our enjoyment!

As if the primary Hamada Shuzu brewery isn’t impressive enough, I am whisked away to another site that is exceptional. A second stunning brewery at the foot of a mountain. Mr Hamada has a strong personality and exudes confidence and commitment. He is also a man that thinks big and this second brewery is a testament to his character. Hamada San has decided that Kagoshima needs good local sake. The Toji, Mr Akito Takesako, brings his knowledge and award winning skills to the project.

Sake production is not the norm in southern Japan due to the warm climate but with modern temperature controlled facilities the weather is no longer an obstacle. Hamada San had a brewery building from the other end of Japan deconstructed, shipped and reconstructed, here at the base of this mountain – and thus is born Kinzangura Sake Brewery. But wait, there’s more! After a cursory tour of the sake brewery I’m shown to the main attraction.

I walk out onto what appears to be a mini train station. There is a miners’ train, train tracks and a gaping hole in the side of the mountain into which I am informed we will soon be disappearing! Mr Hamada has bought (and spent seven years refitting) a 350 year old gold mine into a shochu distillery that sits almost one kilometre under a mountain! The deep mine provides a perfectly consistent environment for shochu production as well as a perfect environment for aging.

That night as we are dining at an excellent Izakaya, Satsumaji and Mr Hamada give me instructions on the perfect shochu pour (I generally enjoy it with ice). First warm a ceramic mug with hot water for 30 seconds, discard water then add 80ml of Shochu and 80ml of hot (70 degrees) water – bingo!

Go inside the culture and sake breweries of Japan