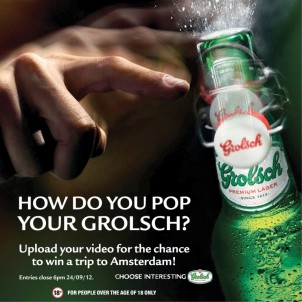 This year at Sydney Bar Week, Grolsch will be running a competition to find the bartender with the most interesting, creative and engaging way to open a swingtop bottle.  Creativity, flair and theatre are encouraged!

The competition is also open to bartenders via Facebook. Simply upload a video of your swingtop bottle opening technique for your chance to win.

Two Australian champions will be announced on 25th September and flown in an all expenses paid trip to the Swingtop Open World Championships.

The Grand Final will be a three day extravaganza, held 11th – 13th in October in the Netherlands.  Bartenders from all around the world will compete for the honour of being named International Swingtop Champion.

Start creating and practicing your swingtop opening techniques now to give yourself a shot at the title and the trip!

More information can be found at facebook.com/grolschbeer