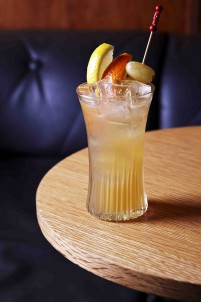 This treat is Cocktail 172 in Jerry Thomas’ The Bartender’s Guide etc. But, if you read the fine print, you’ll notice it’s attributed to Alexis Soyer – a 19th century French gastronomic and celebrity chef. Soyer served with the British Army during the Crimean conflict (1853-65), raising the quality of the troops’ rations. The Crimean Cup, it is said, was dedicated to Alfonso La Mamora, an Italian army general who served during the conflict.  Now that’s all good and fine, but what’s a good story if it doesn’t ruffle some feathers? So while traditionalists might want my neck, I’m re-dedicating this high-proof mix to Sir Harry Flashman, one of Victorian England’s most colourful – albeit fictitious – personalities and a Crimean vet to boot.

The Victorian period is full of colourful chaps and Flash was an absolute devil at shimmying into a lady’s bed; indeed he was once described as ‘the all time ace of boudoir Olympics’. Painted as a venerable war hero (holder of the VC) and a bastion of English courage (he did actually start the Charge of the Light Brigade in ’54. By mistake), the real score with Flash was that his skills in skullduggery were second to none. Never has a man so fastidiously shirked his responsibilities on the battlefield, only to be honoured as the sole brave survivor of an obliterated army. You’d never meet a man whose ability to bludge and funk his way through life was better personified and set against the brilliant backdrop of Victorian era conflicts the Flashman books are a rollicking good laugh.

Alas Flash is fictional. But there were some terrifically flashy characters that were not. Capt. Frederick Burnaby, for example, an officer in the Royal Horse Guards took ‘holidays’ into enemy-Russia during the Great Game* and sold his exploits in titillating novels like The Ride to Khiva. Burnaby did die a glorious death for old Vic’, killed by a spear to the neck while fighting in Sudan. Tragic yes, but you can be sure his exotic tales would have certainly unfurled a set of pantaloons or two in true Flashman style. It’s also damn certain that had Soyer or Thomas known of men like these there would have been a concoction left in their honour. Thomas was all flash and fancy moves behind the bar, just the sort of style old Flashman would have appreciated. And there’s no doubt Flash would have enjoyed Thomas’ cocktails, albeit while getting someone else to foot the bill.

*Popular phrase for the maneuvers between Russia and England, 1813-1907. Also known as the Tournament of Shadows.

Here’s the 2014 Bartender of the Year recap

Meet this year’s Bartender of the Year 2nd and 3rd

Here are the competitors for Bartender of the Year