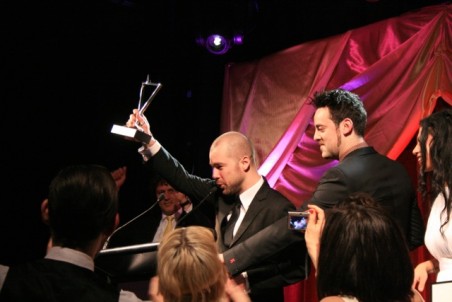 Last night 600 of Australia’s finest saloon owners, boozeslingers and barkeeps donned their best Prohibition style, Roaring 20s garb and congratulated each other on another fine year for the bar industry. As a key part of the new Sydney Bar Week line-up and with the picturesque waterside location at Doltone House, the Bartender Magazine Australian Bar Awards proved once again that it is the highlight of the bar industry calendar.

With Sydney And Melbourne still battling it out for the mantle of ‘Best Bar Town’, it seems that Sydney has come up trumps this year, scooping a bunch of awards. And if the city needs to look somewhere to shower its praise, they need look no further than Anton Forte and Jason Scott, the proud owners of two big winners in The Baxter Inn (Sydney CBD) and Shady Pines (Darlinghurst). With their authentic and passionate approach to making excellent venues “that they want to hang out in”, the boys took out ‘Bar of the Year’, ‘Best Drinks Selection’, ‘Small Bar of the Year’ and ‘Bar Operator of the Year’. Popular bartender haunt Eau de Vie (Darlinghurst) took out the coveted prize of ‘Cocktail Bar of the Year’ while the hugely popular Melbourne nightspot, Black Pearl (Fitzroy) capped off an excellent year with two gongs in the ‘Best Bartenders Bar’ category while also boasting the ‘Best Bar Team’ in the nation. And on the bigger end of the spectrum, The Norfolk (Surry Hills) won the prize for Best Pub, while The Bottom End (Melbourne CBD) was recognised as the country’s finest new hotel.

Brisbane attendees also left the dinner in a jubilant mood with popular new Brissie haunt, Cabiria (Brisbane CBD), taking out the prize for ‘Best Wine Bar’, ‘Best Cocktail List’ going to Canvas (Woolloongabba) and Sean Chow from The Press Club (Fortitude Valley) taking out the title of Rookie Bartender of the Year. And it wouldn’t have been a Bar Awards without a nod to one of the esteemed members of the bar community with quirky and clever bar operator, Michael Delany-Korabelnikova taking out the Outstanding Contribution award.

The crowd waited patiently for the most coveted award of the night, the Bartender Magazine Bartender of the Year award. This prize was fought out of two fierce days of competition where more than 60 bartenders were whittled down to 10 finalists who competed in a mixology round at the Drinks Fest at the Overseas Passenger Terminal at The Rocks, Sydney. The top three were announced at the awards with third place going to a very emotional young Katherine Wasiel from The Bowery in Brisbane, second place to Chris Hysted from Black Pearl in Melbourne and the Bartender of the Year title going to an overwhelmed but very deserving Greg Sanderson from EDV, Melbourne.

Aside from all the wonderful silverware, the beautiful weather and superb location made it a perfect night for some serious celebrating. “It’s great to see people travel to Sydney from around the country to support the bar industry,” says David Spanton, founder of the Bar Awards and Publisher of Australian Bartender magazine. “Everyone really turned on the razzle dazzle with some amazing outfits to fit with the Prohibiton theme.”

Presented by Australian Bartender magazine, the Bar Awards has been described as the ‘Oscars of the bar industry’. The national awards are now in their 12th year and recognise excellence and innovation in bars, hospitality, drinks and hotels across Australia. The Bar Awards is also staged in conjunction with Sydney Bar Week (www.barweek.com.au).

See the full list of winners below. More photos to come in the next couple of days once we’ve had some sleep!

Nightclub of the Year sponsored by Red Bull
Winner: Marquee – The Star, Sydney

Hotel Operator of the Year
Winner: The Keystone Group, Sydney