This masterclass appeared in the September issue of Australian Bartender.

“Actual death was a threat if you bought a really bad batch of bitters.”

A brief history of bitters

Bitters have been around for centuries and they began life as ‘cure-all’ medicines. These days however they’re valued more for their aromatics than their supposed medicinal qualities, yet they’re still favourites as hangover cures and as appetite and digestion aids.

Historically, bitters descended from Europe’s Middle Ages when wines infused with medicinal herbs were popular. However bitters in their concentrated and aromatic form have been much popularised since the first definitive description of a cocktail in The Balance and Columbian Repository in 1806. Listing a cocktail as, “a stimulating liquor, composed of spirits of any kind, sugar, water, and bitters”, bitters plays the final – albeit crucial – role

This concentrated version, however, looks to have been around earlier than 1806, it’s just that an actual reference is yet to be discovered. Bartender’s favourite, and oft-quoted, cocktail historian, Dave Wondrich, has stated that bitters were sold as hangover cures designed to be added to alcoholic drinks in England from the early 1700’s. So if Wondrich thinks so – then so do we.

Cut to the mid-1800s and the birthplace of the cocktail, America, is booming. This period of tippling, categorised by Wondrich as the Baroque Age of Mixology, saw hundreds of ‘patent medicines’ come on the market, all claiming to cure various ailments. From cramps and coughs to cholera and consumption, salesmen throughout the USA were looking to claim a quick buck, and the people who bought them appreciated a socially respectable excuse to get their morning fix of hooch. However, lack of regulation saw unscrupulous traders imitating popular brands and adding inferior or downright dangerous ingredients to their potion. This often caused severe illness in those unlucky souls who downed them – and actual death if you bought a really bad batch.

The U.S. Pure Food and Drug Act of 1906 sought an end to such a diabolical practice, but it also signalled the beginning of the end not just for these ill-made ‘medicines’, but for many of the responsible bitters brands too. What the Act did not kill off, Prohibition would finish and many fabled brands disappeared from the local counter shelf. Interestingly, Angostura and Peychaud’s would see out the ‘noble experiment’ of Prohibition and they are still kicking around today.

Know the difference
Aromatic (non-potable) bitters
These are like flavour enhancers for bartenders. Usually far too bitter to take on their own, their job is to bring flavours together. When used in a drink, they tend not to make the drink bitter. Instead they draw flavour over the palate (bitterness being perceived mostly at the back of the tongue) aiding in creating balance.
According to Brad Thomas Parsons’ Bitters: A Spirited History of a Classic Cure, bitters are, “an aromatic flavouring agent made from infusing roots, barks, fruit peels, seeds, spices, herbs, flowers, and botanicals in high proof alcohol.”

Bitters are often alcohol based, but they can also be made with glycerol, as is the case with many in the Fee Brothers range. “Some insist that bitters must be alcohol based,” explained Joe Fee, the fourth generation of Fees to run the family company. “But we are not using bitters to add [alcoholic] bang to the drink, we use bitters for their flavour – If you have to get a load on though, you could drink it I suppose. I wanna watch though!”

Joe Fee is a good man to set you straight on anything bitters related: his grandfather started making bitters during the Prohibition period after all. Fast-forward to today and the company is doing some great stuff, like creating new flavours and ageing some of their bitters in old whiskey barrels. “Oh it does great stuff,” explained Fee when asked about the benefits of barrel ageing. “The process smooths out the bitters while lending new depths – it’s said that a few litres of whiskey actually sticks around in the pores of the wood too and this comes through in the final bitters.”

Potable bitters
There are a range of potable bitters throughout the world, such as the Gammel Dansk Bitter Dram – a favourite tipple of the Danes and without which a traditional Danish Christmas lunch is not complete. Fernets, more generally, are a type of amaro that tends to pack a greater punch than others. Other potable types of bitter include quinquinas (in which quinine plays a dominant role) and chinati (wine based bitters, like Barolo Chinato). Also in the amaro category is Campari; arguably the most recognisable bitter brand in the world.

What’s in bitters?
Bitters, both aromatic and potable, often have a huge cast of ingredients. There are three parts to aromatic bitters: the bittering agent, the flavouring agent, and the solution (the high-proof alcohol or glycerol used to strip flavours from the roots and herbs). Here’s a few to remember… 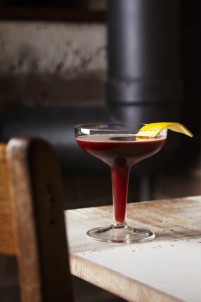 The Bitter End
An oldie – but certainly a goodie. Here’s a great example of a bitters based cocktail for your records.

Shake with ice and strain into a cocktail glass. Garnish with an orange zest.

0
Australian Bartender October 4, 2012
No Comments Yet

Aromatic bitters: Jono Carr weighs in on this crucial tool in the bartending arsenal