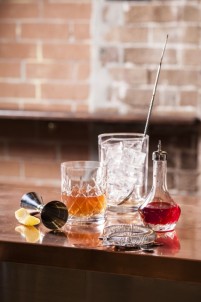 This is part two of an article that appeared in the October issue of Australian Bartender.

Before the 1830s – the beginning of what cocktail historian David Wondrich refers to as the “Baroque Age” of bartending – a bartender’s kit consisted little more that a toddy stick (similar to an elegant modern day muddler) and a nutmeg grater. Individually prepared mixed drinks weren’t the norm you see, Punch was still the king of drinks.

It was the burgeoning ice trade that elevated the barkeep from a man filling glasses with liquor to a conjuror of magical mixes.

“Ice, combined with the American drinking public’s ever-increasing preference for individual drinks made to order over things drunk communally out of bowls, meant that the bartender had to add a whole new set of tools to his kit,” explains Wondrich in my dog-eared copy of Imbibe! “Once the blocks – in New York, at least, they we cubes twenty-two inches [56cm] per side – reached the bar they had to be butchered, as it were into usable pieces.”

This lead to the development of ice-tongs, ice-picks, ice-shavers, ice-saws, ice-axes, ice-breakers, ice-scoops, ice-bags and ice-mallets and more. A simple yet genius invention that the bartenders of today use every shift – the humble straw – was also invented at this stage as a way of keeping the ice away from people’s sensitive teeth. The toddy stick was almost out of a job with the arrival of ice being replaced by long handled spoons with twisted stems. It was a novel new method of mixing drinks though that really shook (ahem…) things up.

Well before shaking was developed skilled bartenders were throwing drinks between one mixing glass and another – ice and all – in a method not dissimilar to the way you might make a blazer. When done well it would have been quite a show though it still lacked the aerating power to emulsify egg and cream the way a modern shaker can today.

It isn’t until 1848 that we find the first written reference to someone actually shaking a beverage thanks to a reporter by the name of George Foster. Foster described by Wondrich as a “pioneering lowlife reporter” described a man in a New York oyster bar with a new contraption; “with his shirt-sleeves rolled up and his face in a fiery glow, seems to be pulling long ribbons of julep out of a tin cup.”

This tin cup that was wide enough to fit snugly over a glass beaker eventually became know as a “shaker” though it went through several names first. In 1862 Jerry Thomas in his How to Mix Drinks noted that “every well ordered bar has a tin egg-nogg ‘shaker’ which is a great aid in mixing this beverage.”

By the end of the 19th Century there were a load of patents for various shakers and strainers not at all dissimilar to what we use today. During the 20th century a plethora of more intricate designs became available for professional and at home entertainment.

New to the online barware scene Bar Geek are importers and purveyors of fine European and Japanese barware. These folk bring you premium bar tools at a competitive price.

This Japanese barware specialist is another new-comer to the Aussie scene. Their stock is high-end stuff. Now you’re just being spoilt for choice.

Founded in 2005, barware.com.au has a massive range of stock that looks to out do your traditional barware store offering everything from straws and glass chillers right through to cocktail equipment.

Before we had a choice of online stores locally, it was a fair bet that you’d be looking up Cocktail Kingdom for your top ‘o the line equipment. They still have a good choice of tools along with bitters and books to boot. The only caveat is that you’ll end up paying a premium even before you’re stung with shipping.

This Germany based company offer a complete range of hospitality items including some high quality barware. Their prices are competitive, but shipping again is where you’ll get stung – delivery too takes a couple of weeks.

0
Australian Bartender October 23, 2012
No Comments Yet

Old Mate’s Place: inside Sydney’s latest and most talked about rooftop bar

3R Tequila and Kansei to send four bartenders to Mexico