Can absinthe outgrow its troubled reputation? 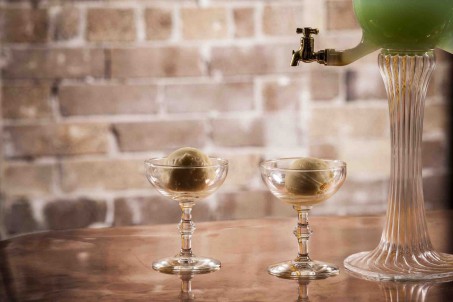 This feature appeared in the October issue of Australian Bartender.

It’s August 28th, 1905, and Swiss labourer Jean Lanfray, is awake early. He fixes himself a glass or two of absinthe before heading in to the fields to work with his father. They stopped at a cafe on the way for coffee and brandy.

During lunch, a thirsty Lanfray drank six glasses of wine, then another during the afternoon, and they took brandy in their coffees that evening on the way home.

Once home, he drank another litre of wine, got into a yelling match with his wife, grabbed his rifle and shot her in the head. He shot his two children and then turned the gun on himself, lodging a bullet in his jaw. He survived, was convicted of quadruple murder (his wife was four months pregnant when he shot her), and hung himself three days later.

The lesson from all of this, you might think, would be that guns and alcoholics don’t mix (Hemingway, we’re looking at you). But what the Swiss took from this awful day was that absinthe, that drink of tawdry and deleterious reputation, had to be banned. But as long as you didn’t have a nip or two of absinthe it was quite fine to drink five litres of wine a day, thank you very much.

It was this day that many cite as spurring the prohibitions on absinthe that popped up around the world, and cemented the reputation of absinthe. But with time, and science, the myth that absinthe was hallucinogenic, and could cause absinthism, was broken. Absinthe’s renaissance began in the 1990s, but cooled off when the public realised that it didn’t have the mind-altering bohemian bona-fides the first thought in the late 2000s.

Though there was a peak in absinthe sales in 2008 as American awoke to the green fairy trend, sales since then have plateaued. And now producers are turning their attention to premium absinthe and education in a bid to boost sales.

Recent reports have said that Pernod-Ricard and other French producers have banded together to campaign for a definition for absinthe from the EU and for appellation d’origine controlee status. They will argue that absinthe should only be labelled as such if it is produced in France or Switzerland.

And this raises the question: should absinthe production be limited only to those two countries? Absinthe may have evolved from a village remedy in the French speaking parts of Switzerland, and popularised by the French, but it was quickly being produced elsewhere. And what the story of Lanfray shows is the reach of absinthe. Fear of what absinthe was doing to their societies led a succession of countries to prohibit it. Belgium outlawed absinthe in 1906 and other European countries followed, with France itself finally succumbing in 1914.

But the large majority of production of absinthe continued in Spain. Known there as absenta, it was in Spain that the ombibulous Hemingway would first become acquainted with it. He drank it in Cuba too, where it was produced in the years before Castro. Apparently the Spanish weren’t too keen on absinthe, though (they have their own anise-flavoured spirits), and the biggest market there was backpacking would-be bohemians.

After 1989, post-Velvet Revolution Czech Republic entrepreneurs again brought absinth (now with a lost “e”) to the world. They found demand for the spirit in London, which had never banned absinthe as it had not before been popular.

This Czech style of absinth, with virtually no anise flavour running through the drink, came to be known as the Bohemian style. But it’s not right to paint all Czech absinth with the same brush, as newer examples like the Green Fairy Superieur look to chart a different direction, emulating the French verte style of absinthe.

Whatever happens with the efforts to legally define absinthe in the EU, whether bartenders find their absinthe produced in the U.S.A, Australia or elsewhere, it is clear that there is room for a range of absinthes throughout the world.

Absinthe is a distilled spirit, traditionally from a grape base (though other neutral alcohol bases will do), that is either distilled or macerated with grand wormwood, fennel and green anise (known as the holy trinity of absinthe herbs). Other complimentary herbs are often used, including star anise, lemon balm, mint, hyssop and coriander seed.

Why is absinthe sweet-tasting?

True absinthe has no sugar added to it before bottling, so it is not a liqueur. The perceived sweetness that comes through is from anethole, a flavour compound common to fennel, star anise and green anise. It is “intensely sweet – 13 times sweeter than table sugar, weight for weight” writes food scientist Harold McGee. He also ascribes the louching effect, which is the cloudiness that comes when absinthe is mixed with water, to these molecules of anethole. Apparently they dissolve in alcohol but when water is added, “the anethole molecules cluster together in bunches big enough to scatter light.”

And what about thujone, the active ingredient supposed to cause hallucinogenics? Thujone is toxic to the nervous system, muscles and kidneys when consumed in high doses. Importantly, it doesn’t ever reach levels anywhere near that in absinthe nor in other beverages containing wormwood. But it doesn’t provide hallucinations; rather it is likely that any visions were caused by cheap, adulterated imitation product. Pre-ban absinthes have been tested and levels of thujone were found to be nowhere near the legal limit of 10mg/L. The thujone content of absinthe is often stated in marketing, but it means nothing.

0
Australian Bartender October 29, 2012
No Comments Yet

What is vermouth? Is the aromatised wine finally about to get its due?

Absinthe, knife-fighting, & ways to mix it