Why you need to add this event to your bucket list 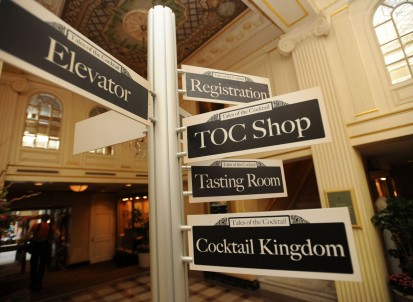 This postcard appeared in the October issue of Australian Bartender.

Never been to Tales of the Cocktail? Then you have to put it in your bucket list. Having celebrated its 10th anniversary this year, Tales has become the most happening event on the planet.

More than twenty thousand people descended on “Ground Zero” (being the Hotel Monteleone) in the French Quarter, a network of narrow streets dating back to the mid seventeen fifties, amidst French Creole architecture. The event spilled out onto the streets and into the very cool and funky bars that saturate the city that I call “Amsterdam in the Tropics” or as they call it, “The Big Easy”.

New Orleans, the birth place of Jazz Music, surrounded by the “bayou” full of alligators and mosquitoes was packed with the world’s best bartenders, bar owners, spirits enthusiasts, bloggers and brand ambassadors coming together over five days in the middle of the hurricane season. Sounds crazy, and it is!

There are two parts to Tales of the Cocktail.  Tales by Day where you could have attended some of the 56 seminars held over the 5 days and all within walking distance, on such varied subjects as “The Art of Spirits Blending” with ex Herradura Master Distiller Miguel Cedeño, or “Agriculturally Anonymous” with Misty Kaukefen and Phil Ward, looking at sustainability in the spirits industry, to “Bottle Alley, Drinking the Panama Canal” with Dave Wondrich and Jeff Berry which is self explanatory.

At “Sporting Life 2 – Stories, Songs and Sketches”, the audience cried as they listened to Gary Reagan share the tragedy and the humor of his life in the pub during the ’60s and ’70s. His father ran The Prince Rupert, the local pub in a working class town near Manchester in England. Gary told the story of how, from the age of thirteen, he worked in the pub and learned the hospitality industry. He realised later how his dad’s role in the community was not just as a publican, but that he also played the role of village counselor. Whenever there was a death or an emergency in the village, it would be “Quick, ring the pub” and his dad would ring the police and often go and help them or be with them.

Gary also recalled the sad moment when his father was already deceased some years and his mother Vie lay on here deathbed. The doctor came and told him that he would have to give his mum permission to die, so he went to her bed and told Vie that he would be all right without her and as he drove home she died. Truly heart-wrenching stuff.

At “The Spirit of the Spirit” I saw Ron Cooper explain the integral role Mezcal plays in the Zapotec religion, where the Judge of the festivities first pours mezcal on the floor in the shape of a cross, for Mother Earth and their ancestors to begin the celebration. Then Martin C. Duffy and Eric Seed explained the involvement of the church in the history of Benedictine and Chartreuse. There are so many great seminars often at the same time, you really have to be selective and realistic as to what you can see.

Then there is Tales by Night with the many parties in such places as the “New Orleans Museum of Art” run by William Grant and Son and featuring 14 Bars inside and out. Guests mingled while DJs played amongst 17th century paintings or Diageo’s Happy Hour Party held at the “New Orleans Mint” with 18 Bartenders including Tim Philips, spread across 12 bars. From these it was off to the various bars scattered through the city, places like Alibi, or Absinthe House or One Eyed Jacks.

Tales of the Cocktail is a melting pot of extraordinary industry people sharing information and networking in a very funky town.

This celebration of our Industry is the best damn thing on the planet.

0
Australian Bartender November 12, 2012
No Comments Yet