This revamped hotel is 128 years young 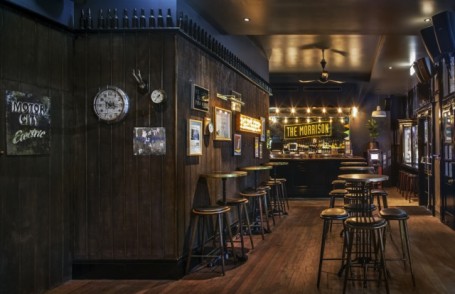 The bar profile appeared in the November issue of Australian Bartender.

In 1920’s Sydney, if you drank at a pub and hurt yourself it was you’re your own fault. One Christmas Eve morning in 1927, a naval petty officer fell 25 feet from the second floor of the Brooklyn Hotel, suffering “a probable fracture of the spine, fractured skull, and fractured jaw”. Today that might spark a media and public outcry. Instead, the Sydney Morning Herald at the time pithily reported that “it is believed he overbalanced on the railing.” Things, of course, have changed.

Down through the years the site on which The Morrison Bar & Oyster Room now sits has seen it all. Think of how much history this place witnessed, as a gleaming city of glass and steel grew up around it. To owner Fraser Short this was an advantage.

“It had so many previous lives,” said Short, “that we saw this as an opportunity to create something completely new and fresh.”

The site, on the corner of Grosvenor Street and George Street, saw duels pitched and conspiracies plotted when it served as the Parade Ground for the Corps. It is from here they marched on Government House, arresting Governor Bligh, and kicking off the rum rebellion in the process.

The site became a boozer in 1884, when it was known as the Sydney & Melbourne Hotel. It wasn’t long before its next iteration in 1889 when it became the Sydney Palace Hotel, before changing monikers once more in 1898 when it became the Brooklyn Hotel. Then around 1912 they knocked the building down only to resurrect it in the Edwardian style that its façade boasts today.

The latest epoch begins 100 years after the current building was erected with the rechristening of the hotel as The Morrison Bar & Oyster Rooms.

“The original name The Brooklyn Hotel was a very confused brand,” said Short. “However, I liked the idea of naming it ‘The…’ something. I am a massive Doors fan and love their album Hotel Morrison so decided on ‘The Morrison’.” Coincidentally, the day they took over the lease, said Short, “was the 40th anniversary of Jim Morrison’s death.”

Drinks are headed up by Ben Wakelin and sommelier Michael Block and both are designed to complement chef Sean Connolly’s food. Bar service, says Wakelin, starts with a customer-centric approach.

“I think people are looking for their favourites done really well, time and time again,” said Wakelin of the drinks program. “That’s something we offer.”

The wine pairing is crucial in a place devoted to the wonders of the oyster. “The Morrison serves three types of oysters,” said Block, “the three most common found in Australian waters: the Sydney Rock, the Pacific and the Angassi.” What might we expect in terms of wine matches at the Morrison? It depends on the oyster, said Block.

The food is driven by the idea of cooking in the shell and on the bone, which according to Connolly, is taking things back to basics.

“In my opinion, it helps retain moisture making the meat tender and more flavoursome,” he said.

“My travels have taught me to have a ‘less is more’ approach to food so I am confident in putting less on the plate and letting the food speak for itself.”

And Connolly shares the idea that food and drink is more about people than just gastronomy for the sake of it. “Food is a vehicle for conversation and The Morrison’s food philosophy is communal service,” he said. “We offer substantial share food which can be accompanied with some very traditional sides, ones we all know and love.”

It seems this was Short’s vision all along. The Morrison is “aiming to create a relaxed atmosphere to give patrons a destination to escape their busy lives and unwind in comfort,” said Short. “Our vision was to create a place for people to feel as though they are at home, among friends – dining in the Oyster Room by the kitchen or in the Conservatory under the stars. Or if they are after a drink, well, they will be smothered with choice.”

The Morrison is a marker in Sydney dining and drinking of just how far the city has come since the days of the old Brooklyn Hotel – even just 20 years ago. But more needs to be done, argued Short, suggesting that the Sydney scene needed “more support and understanding of licencing issues and more cohesion from bar owners to band together to acknowledge and highlight the issues we face and develop long term and workable solutions.”

Some things might be out of his control, however. When asked what Sydney needed less of, he said: “less rain and cold weather!”