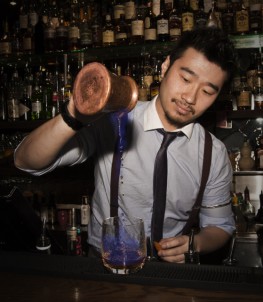 This guy was nominated for Rookie of the Year at the Bar Awards this year and has a damn impressive resume for someone with less than two years ‘tending stick. Introducing, Samuel Ng.

A little under two years currently.

I cut my teeth as a barback at Botanical in South Yarra, and due to a quick learning curve and a fast change in staff, ended up as the assistant manager there after a mere 4 months! From there, I did a short stint at Golden Monkey, managed the Burlesque Bar on Johnston Street and spent a bit of time in New York where I was working at a bar called Employees Only.

Started my hospo life as a barista and waiter, but got serious about it when I became a chef.

Probably being nominated for Rookie of the Year at this years’ Bar Awards and also being chosen to represent the Pearl, along with Hysted, at Tales of the Cocktail in New Orleans 2012.

And the most embarrassing?

The usual espresso martini exploding over a fresh white shirt at the start of a shift; losing my grip on a shaker during a double shake and sending it into the back bar behind me.

What advice would you give a rookie bartender?

Still being a rookie myself, I guess make sure you’re in a place you can keep learning, you’re around good people, and where you can look up to others to mentor you. Absorb knowledge, read books, and get more experienced bartenders to taste your drinks and give you feedback. Be humble.

The Black Pearl, of course! After that, probably Employees Only in New York. Both bars have a very similar feel. Very hospitable and a great friendly vibe, where it gets fun real quick.

Don’t stop me now – Queen. It always makes me smile.

Stir down, serve up. Orange twist. Smiles all round.

What spirit should people be drinking more of?

Can you tell us some of your favourite bars to drink at?

In Melbourne I love the Everleigh. Madge and the crew are fantastic. Eau de Vie Melbourne is great, and our new best-kept secret is Hell Towers Saloon. Internationally? LKF tower rooftop bar in Hong Kong has an epic view. In New York I definitely recommend Employees Only, Macao Trading Co., Milk and Honey, PDT, Cienfuegos and probably one of the sexiest bars I’ve ever been to is Raines Law Room.

A bottle of water.

A bottle of water? Probably a Vieux Carre.

Jesus. It would certainly sort out a lot of questions in this world. And plus, you could keep getting rounds of water…

20 ways to pick up women. When that didn’t work, I got the Fat Duck cookbook by Heston Blumenthal.

What cocktail trends are popular at the moment?

In Fitzroy, I guess the negroni is ever popular but we see more and more people being adventurous and going tequila in cocktails. More bartenders are finding cool uses for soda siphons and molecular gastronomy is creeping in again too, but in subtle and refined ways.

Probably a doctor, coz that’s pretty Asian. Or a guitar-wielding rockstar, coz it’s not.