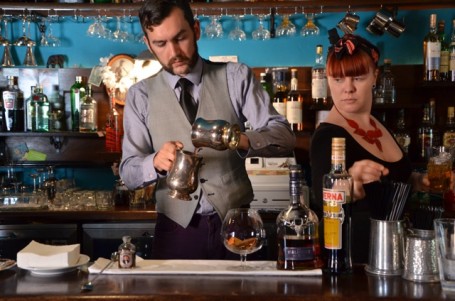 Aromatic bitters: it is a trickier category for tastings than most, and requires a little more experience as bartender than do other drinks categories. Just as well we were at the Hazy Rose, in Darlinghurst. We sourced a surprise for this the issue, with the Hazy Rose crew among the first bartenders in Australia to get their hands on the Dale DeGroff Pimento Bitters.

The DeGroff bitters, emblazoned with a label depicting a handsome Dale sporting a tuxedo, kick-started the tasting. “He pretty much just wears tuxedos these days, right,” suggested Brendan Keown, and there was some likening of Mr DeGroff to a silver fox by bar manager Harriet Leigh. In the end though, we got down to the important stuff: tasting.

They diluted each bitters with some water so as to open up the bitters for tasting.

“Now I’m getting more of that aniseed, licorice,” said Harriet.

Straight up Brendan was thinking of the Dalmore 18 year old, because of the Christmas pudding and spice characters.

“It’s different from what I expected,” said Brendan, echoing the group’s sentiments. “That clove is the driving force for me,” said Dominique. “It would be great for blazers,” said Harriet.

Turning to the Bittermens Elemakule Tiki bitters, the aromas leaped out of the glass.

“Cinnamon, nutmeg, lime,” said Harriet, while Brendan had his own madeleines moment. “You know those frozen cola pops,” he said, “you’d get them for 5p at the shop. I’m a child again!”

“It’s not just tiki, you could do all sorts of stuff with this,” said Harriet.

“It’s almost tongue-numbing,” said Dominque of the interplay between the cinnamon notes and the alcohol strength, “I don’t think you’d need much of that.”

“There’s citrus fruit in that, I get quite a lot of lime in that,” said Harriet, and Brendan thought it would make a handy stand-in for Angostura bitters in a traditional lemon, lime and bitters. “Something a bit different,” he said, suggesting also using bitters in a Gimlet.

“It would definitely work with tequila,” said Harriet, “but can see it going well with a peppery kind of gin.” 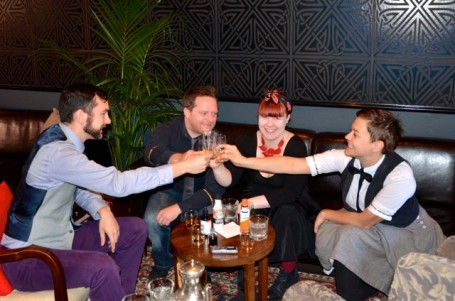 Attention then turned to the two orange bitters on taste. The Fee Brothers Gin Barrel Aged Bitters came next. It was a rounded and subtle bitters that tended to linger – one that snuck up on you.

“There’s some childhood medicine memory going on there for me,” said Harriet. “To be honest I’m getting some Berocca notes,” said Dominique of the candied orange notes.

“It smells really sweet,” said Alan about the differences between the nose and the palate, “but it ends up very dry.” Brendan agreed, saying “I find the Fee Brothers range a bit like that, they’re really punchy up front, big bold flavours.”

“I think there’s some chalkiness,” said Dominique, and Brendan suggested the dryness was due to the oak ageing.

“Once the dryness goes, right at the end there is a little bit of that herbaceous complexity,” said Brenda when discussing whether there was much influence from the gin the barrels had been previously seen. “There is something a little bit ginny about it,” said Harriet. Dominique thought it would work better with some sweetness, even a bourbon that had a touch of sweetness to it. “It’s almost a little like gentian,” said Dominique. Brendan and Harriet thought the sweetness may be down to the use of glycerol.

Then to round things off was the Angostura Orange Bitters. “Now that’s quite interesting smelling it after the last one,” said Dominique, ” I usually find Angostura quite candied but next to that it smells quite herbal.”

“There’s something quite floral as well,” said Harriet, which the group noted was intriguing. “Frangipani!” said Brendan. “Instead of drying out, it’s quite rounded,” said Harriet. “I’m still getting it,” said Dominique if a finish that kept lingering. “Again, I think it would really work well with Chartreuse,” she said.

“I think it would work well with gin,” said Alan, “and again rum.”

Laden with a load of ideas the team then proceeded to step behind the bar. they came up with four distinct, unique drinks that each showed off the respective bitters in their best light. Well done to the Hazy Rose – we look forward to stopping in again soon. 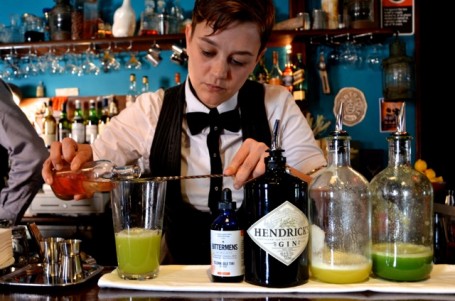 “”Initially I approached it like a whisky mac – I wanted to use the Stones Ginger Wine and I thought the orange bitters would go really well with bourbon, so I wanted something a bit spicier to complement the bitters so I went for the Four Roses Small Batch. It needed a little bit more of a kick so I added the ginger beer, and the Yellow Chartreuse really complimented the herbaceousness of the orange bitters, creating a long, summery drink.” 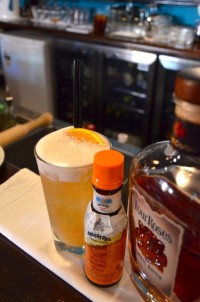 Cocktail Name: Return of the Mac

Shake all ingredients and strain into a highball filled with ice.

Top with house-made ginger beer and garnish with an orange wedge.

“I approached it as a tiki drink – but not as an obvious tiki drink. Instead of the usual culprits culprits like rum, used the stool in it and because it’s a bit spicy matched it with a bit of chilli. Cooled it down with a bit of cucumber and my one tiki ingredient, the pineapple juice. And I remembered the nice salty, smoky Sotol.” 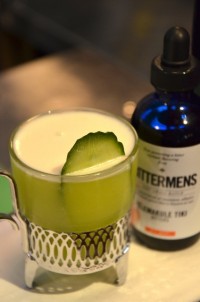 “I tried to think if what Dale DeGroff would drink at the end of a hard day applying gold-leaf to all his cocktail ingredients. He’s got the tux and he’s all about class. Its allspice, its pimento, its rich and Christmas pudding-y, so lets go for a blazer with Dalmore 18, which has some similar flavor profiles but helps it all pop. Put it in a balloon over some cinnamon, some cloves and blood orange zest, star anise, and think about your next lecture for Tales of the Cocktail.” 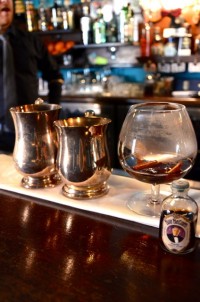 “Coming into summer I wanted to create something light and crisp and summery. I was inspired by an Aviation style drink and using gin, maraschino liqueur which goes well with gin and using the Cointreau to marry the bitters with the rest of the drink – and a bit of lemon juice to add that edge of acidity.” 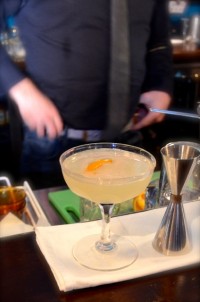 Cocktail Name: Lady in a Barrel

A blend of citrus essence and oils from bitter and sweet oranges. Displaying a unique blend of herbs and spices, Angostura Orange Bitters creates a depth of citrus flavour that will transform and enhance a wide range of cocktails.” Island2Island

Our formulation takes into account the contributions from both the Eastern (Polynesia) and Western (Caribbean) schools of tropical cocktails. Primary Flavors: Cinnamon and Allspice with a strong cast of supporting spice flavors. Vanguard Luxury Brands

Dale DeGroff’s Pimento Aromatic Bitters was created by blending pimento, a complex and layered spice, with a hint of anise and other herbs. Pimento, the Jamaican word for allspice, adds a wonderful accent to many drinks. www.kingcocktail.com

0
Australian Bartender December 3, 2012
No Comments Yet

All you need to know about cocktail bitters

The Hazy Rose: an institution in the making