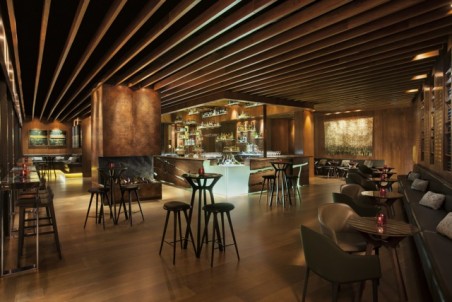 Sydney’s northern CBD is witnessing a bibulous revival right now. Venues like the Morrison, Palmer & Co, and now, Grain Bar, have dragged the north stretch of George Street into the modern drinking world.

The emphasis on quality is one of the first things to notice about Grain. Yes, they’ve spent money on the fitout. But a look at the ingredients in the drink and food menus tells you so much more. From house-made lardo to Rangers Valley hangar steak with a 7+ marbling score, to a drinks list built on classics both well-known and forgotten, Grain Bar walks straight in to the dress circle of the best hotel bars in the country.

That quality focus is represented in the bar team, too. Led by David Ramos Hernandez (formerly of Low 302 and Bayswater Brasserie), they have assembled a talented team of ‘tenders (including the likes of John Carr, formerly of Assembly).

Take a look at The Push in the Rocks