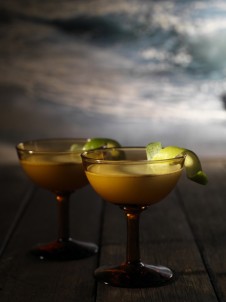 In 1682, rum was big business in the American colonies. So much so that, when faced with the imminent arrival of a “hundred or more” heretic Quakers, Puritan clergyman Cotton Mather thought he could sell them for rum. “Much spoil can be made by selling the whole lot to Barbadoes [sic],” he wrote, “where slaves fetch good prices in rum and sugar”. Such was the appeal of rum – the New England colonists were crazy for it.

But given that New England’s settlers were handy distillers – their craftsmen made better stills than the Caribbean and they made loads of rum – why are they not known for rum today? The problem, according to Ian Williams’ Rum: A Social and Sociable History of the Real Spirit of 1776, was that the rum was poor compared to a Barbados rum. It didn’t have the richness or colour of Caribbean rum. New England was cold enough for apple growing and cider making, but not hot enough to age rum quickly like they did in the tropics. Thus Barbados and the Caribbean became known for their rum; New England didn’t. Instead, Puritans like Cotton Mather are better known today for hanging little girls during the Salem witch trials. Thus New England is more famous for its witches and Puritans, than it is for rum.

But Barbados’ success with rum is more happy accident than clever design. It is more about making do than making a masterpiece. Rum, after all, is the ultimate in thriftiness: it is the byproduct of a byproduct.

Events far away – and beyond control – are why Martinique’s rhum is the way it is today. Early on, an insect named Phylloxera vastatrix helped the island on to an early boom in rum production as it ate its way through the vineyards of Europe in the 1860’s. It destroyed some two-thirds of the continent’s vines and decimated wine production. But it was all upside for Martinique: by 1880 the island was home to 500 distillers. Production boomed again during the first world war as producers made industrial alcohol for the military, but after the war, when France turned to domestic sugar beet producers for its sugar, Martinique was left with surplus sugar cane juice. And so they made a Franc the only way left open to them: rhum. The rhum as we know it now came about as producers sought a way to survive the post-1945 import quotas imposed by France. Lacking the demand for quantity, they instead chose to market quality. So it is necessity – the desire to make a buck and just get by – that gives us rhum agricole today.

The desire to keep that buck from the taxman is behind the high-ester rums of Jamaica. Thanks to a Dr H. Cousins (and his experiments with dunder) the Jamaican government devised a novel way to work around the Germans’ tax on imported rum (that was designed to prop up German producers). According to Dave Broom’s Rum, Dr Cousins created “an ultra-concentrated rum which, when added in small quantities to German-made neutral spirit, resulted in a rum-flavoured drink known as Rumverschnitt.”

Sometimes rum is means something more. In Haiti, despite dictatorships, foreign occupation, corruption, hurricanes and earthquakes, there has been one constant: Rhum Barbancourt. It is part of the people’s religious life, with a spilling of the distillery’s seven star rum considered a worthy offering to the departed. And it is part of their economic life, with some 4000 Haitian farmers selling their sugar cane crops to the distillery. So when the 2010 earthquake took some 316,000 lives, injured another 300,000 and made one million Haitians homeless, the effects were felt longer because it damaged the distillery as well, causing the loss of one third of their rum stocks. The damage caused the distillery to reduce the volume of sugar cane it processed as it got its operations up and running, ultimately affecting the farmers that supplied it.

In Nicaragua, it is the response of Flor de Cana to the political environment (and its efforts to survive) that resulted in its unrivalled stores of extra-aged rum. Whatever their politics, Flor de Cana is one thing all Nicaraguans agree on. But when the socialist Sandinistas were in power in the late 1980’s and appropriated the sugar mill that supplied Flor de Cana with molasses, the company had to stash its rum – and set up a second distillery – in neighbouring Honduras. With the return to freer markets and a craft cocktail revolution taking place, Flor de Cana found itself with something bartenders all over the world wanted.

Ever wondered why some rums have big, fruity characteristics? What you’re smelling are esters – molecules that are a compound of acids and alcohol molecules that when joined give us aromas of banana, pineapple and apple among others. Yeasts are central to this, metabolising the sugars during fermentation and producing carbon dioxide and alcohol. The number of esters in a rum depends on many things, but chief among them is the fermentation period. Short periods – around a day or two – result in lighter rums. Longer fermentations – anywhere up to two weeks long – result in a greater number of esters and more pungent rums. Longer ferments expose the wash to wild yeasts and bacteria too, contributing their own complex and pungent aromas.

And then there is dunder. Traditionally, dunder refers to the sour, stinky fermented wash that it is littered with the spent lees of previous fermentations. This mix is left in pits and continuously topped up. It is full of concentrated butyric acids which, when added to the longer fermentation results in a high-ester style rum (in Jamaica, known as a Wedderburn rum). The local yeast used in Batavian arrack, a proto-rum produced on the Indonesian island of Java since the 16th century, contributes part of its distinctive aroma (the fermented rice used to kick-start the process also helps). The local yeast strain and environs yields a result that becomes a funky, smoky, primordial spirit.

But the effects of yeast can be undesirable. Brettanoymces is a yeast, responsible for the blue cheese aromas in some Bordeaux; but, “Brett” as it is referred to, is considered a taint when it is too noticeable (giving aromas of barnyard and the ever-delightful “band-aid”). Taste, after all, is a subjective thing!

Distillation also can help ester production. Pot still rums are distilled to a lower alcohol level than those from continuous stills (as in the Cuban style) and thus retain more of their estery character.

A Flip Around the World 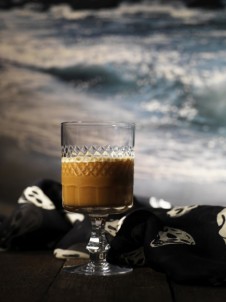 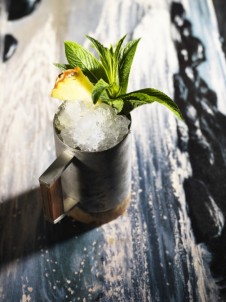 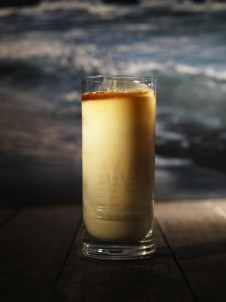 60ml Bundaberg Spiced Rum
15ml Pedro Ximenez float
30ml Fresh orange juice
30ml Spiced pineapple
20ml Coconut cream
With the spiced pineapple we peel it and keep it whole then sprinkle the following spices on it and bake it in the oven for approximately 2 hours:
Star anise, ground cinnamon, ground all spice and poke it with some whole cloves.
Adapted from a recipe by Daniel Pasley, Laruche, Brisbane 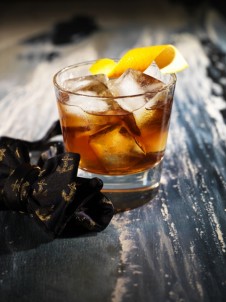 Add everything but the rum to bottom to a glass. Add a dash of water then build rum with ice gently. Rocks. Orange twist – originally no garnish though
Adapted from Jamie Bourdeau’s recipe – Jason William’s favourite cocktail right now so it must be good!

The Laugh of the Devil 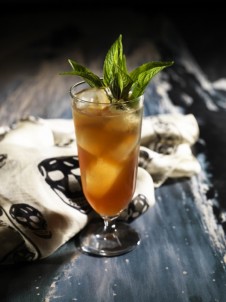 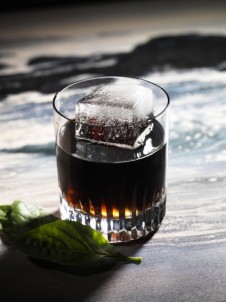 Quiz: Know your rum from your rhum? Try this month’s quiz

1. What year did the Rum Rebellion take place?

2. What does the term vesou describe?

3. Why are spirits said to mature quicker in the Carribean than they do in Scotland?

6. What aromas are esters known for?

9. Which black, spiced rum is named after a mythical creature?

10. What is the national drink of Haiti?