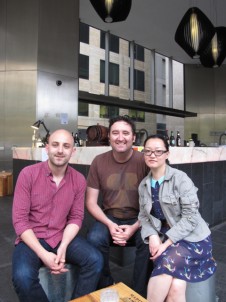 The team behind Sydney’s successful Grasshopper bar – one of the first small bars to brave the CBD – have opened their second venue with wheels already in motion for a third. Boston as the café cum bar is called is nestled at the base of the Gateway building just a stone’s throw from Circular Quay. Open Monday through Friday the venues offers up coffee, cocktails and food to Sydney’s white collar workers in a precinct that’s soon to be bolstered by Rob Sloan’s, Tim Philips’s and Adi Ruiz’s Bulletin Place opening this month. Martin O’Sullivan is tight lipped, though visibility excited about his team’s third venture though he’s promising to tell more in the month’s to come.

Call on a taste of old colonial Boston this winter, with this Hot Ale Flip recipe

By George! Seven Metre Bar Pops up in Sydney Laneway