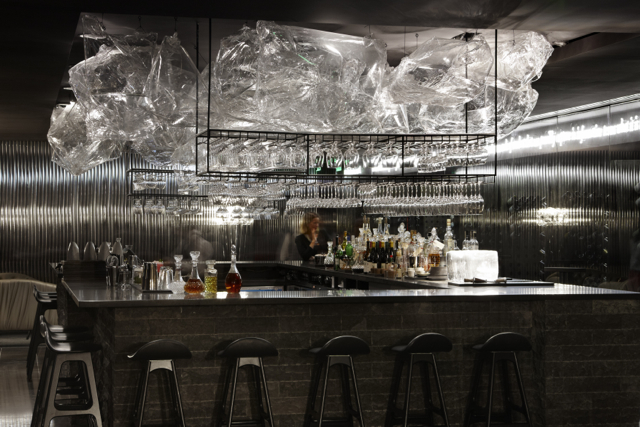 Think Lui Bar and you’ll probably think that Skipper Josh has been at it again, or some other brave soul is testing the waters of tiki mania. But if you’re looking at the pictures on this page, you might be wondering if he’s a bit confused. What happened to the girls in coconut bikinis, the pineapples, the hibiscus prints, and the kooky Pacific island glassware? Well, this Lui Bar ain’t no tiki dive. Nope. This Lui Bar is actually part of the high-flying, new-look Vue de Monde, Shannon Bennett’s iconic and multi-award winning restaurant that has recently moved to the 55th floor of the Rialto tower. And the name? Well, it’s actually named after Luigi Grollo, an Italian immigrant who moved to Melbourne in the early 1900s and started building skyscrapers, changing the Melbourne skyline forever.

And speaking of skylines, Lui Bar is now the place in Melbourne for vista watching. Facing south, the view takes in the bay and stretches out to the horizon. Pretty spectacular. Lauded chef, Shannon Bennett, wanted to give his restaurant a new lease on life and took inspiration from: “Marvellous Melbourne, the Gold Rush and the opulence in the city during the 1850s, a time when Melbourne was one of the world’s cocktail capitals,” said Geoff Fewell, Lui Bar manager.

Elenberg Fraser collaborated with Shannon and the team for the design of The Lui Bar (they also worked on the old Vue de Monde, Bistro Vue, Café Vue and also Café Vue on St Kilda Road and at the airport). It’s clear that this small room has been a labour of love. Each piece of furniture has been carefully selected, draped in stunning fabrics and set in just the right position to enhance the real aesthetic star of the show – the view. But it’s not the same-same hotel-style furniture you might expect to see at such lofty heights – a mix of eco-friendly, recycled, modern and antique pieces have been used giving the room a vibe that’s definitely fancy but also a little bit relaxed.

To gain access, you have to ask for Lui on the ground floor and you will be escorted to the lift, which will whisk you up Matrix-style to the drinking and dining spectacular. Head to the central bluestone bar and take note of the stunning ‘chandelier’ made from residual plastic, commissioned from artist Mikala Dwyer. Everything in here is pretty nice to look at. But ultimately it’s not the ‘dressing up’ that makes a bar. After all, people are here to quench a thirst and fill their bellies. 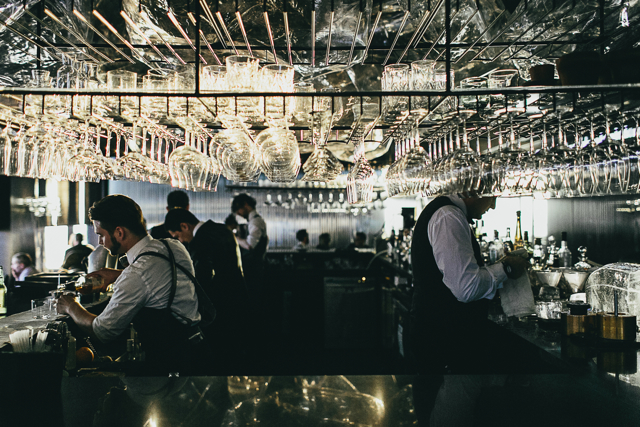 Think Australiana and you’ll likely think VB, stubbies, snags on the Barbie and cricket on the telly. But the boys at Lui Bar are turning this concept on its head, incorporating a truly Aussie vibe into this decadent setting. According to the bar team: “We are dedicated to showcasing the history of Melbourne through fresh seasonal produce and cutting edge technology.”

The bar team we speak of is headed up by Sebastian Reaburn, a former Bartender of the Year, Brand Ambassador of the Year, bar owner and author (need we say more?). He is joined by Michael Forbes who won Iron Bartender in 2012 and Adam Roderick who is their resident microbiologist.

Cocktails are divided into ‘yesterday’ and ‘today’ and feature gems such as: the Lola Montez Spider Dance Fizz, a tribute to a 19th Century Irish stripper whose tarantula dance was a big hit with the gold miners; and the Koala Stinger, a drink incorporating eucalyptus which was a hot trend in years gone by. According to the bar team, the big hit at the moment is the Vodka Pour Over – cold extracted coffee served with The Lui Bar’s unique liqueurs.

Topping the list of essentials for the team is premium ice. According to Adam: “We source slow frozen ice to be used in our drinks which we then match to each drink – whether it be block, cube, crushed or spheres.” The whole team agree that ice is central to great drinking.  “It’s the first thing you see when you walk into The Lui Bar and the last thing you see in your glass,” concludes Adam.

In addition to the ice, the boys are also benefitting from the proximity to such a cutting-edge kitchen with a lot of valuable creative input from the chefs. Adam comments: “Working alongside the Vue de Monde kitchen means access to some brilliant produce and exposure to techniques you simply can’t do in other bars like using dry ice, liquid nitrogen, rotovap, a chamber vac sealer and blast freezers.” They also have access to some of the best produce in town with an open invitation to the Heide and Burnham Beeches vegetable and herb gardens.

The snacks on the menu at The Lui Bar certainly aren’t a side dish. With Vue de Monde’s Head Chef, Cory Campbell in charge of the bar menu, the offerings make the ordinary extraordinary. Take the fish and chips, for example: they start with chickpea chips and infuse them with parmesan and truffle then stack them like a Jenga game. This is accompanied by a fish emulsion. Then there is the Wagyu beef cheek sandwich and the roadkill terrine which is slow braised David Blackmore beef served on house baked beetroot ciabatta. The terrine is confit duck and foie gras moulded into a miniature Audi A3 served with local breads on a classic Aussie road sign.

And if all of that is not enough to entice you to Melbourne’s fancy new tippler then perhaps this will. “We also have Melbourne’s highest outdoor smoking area,” says Fewell, adding: “Who doesn’t love sipping a nice single malt while enjoying a Cuban cigar?” We say cheers to that.

0
Australian Bartender February 12, 2013
No Comments Yet