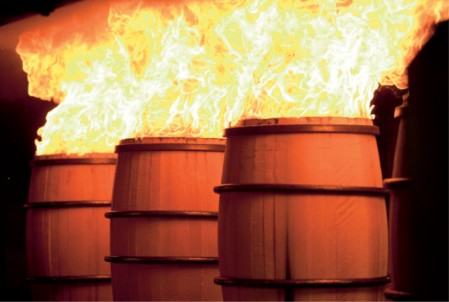 You get out what you burn in

It’s elemental, really; it’s something quite primitive. The reason for the barrel, originally, wouldn’t have been to “age” wine or spirits in the way we think of (indeed spirits didn’t come along until much later). Instead, barrels made things easier to transport. Sure, barrels were used to keep things in for a long time, from one harvest to another, say. But the idea that the character of the liquid inside happened to change — in a way that people found pleasing — is really a secondary, happy happenstance.

The character that a barrel gives a spirit (or a wine) begins with the oak that is used. American white oak tends to have a greater concentration of vanillins; the effect of French oak tends to be gentler, more subtle. The staves for the barrel first need to be seasoned; this means that they lay outdoors subject to the elements for anywhere from six months (for bourbon barrels) to two years for high-end French oak wine barrels.

Then man’s mastery over the elements comes into play. The cooper steams the staves into shape, guided by iron hoop rings. Then that oldest of forces, fire, is unleashed; it scorches the inside of the barrel killing off bacteria in the process. And, as nature would have it, the by-product of this is flavour. For wine barrels, this part is the toasting; for spirits, and bourbon in particular, this is when the char begins.

And there are many variables for the cooper and distiller to consider.

For one, there are different levels of char. They’re known, in the US as Char 1 through to 4. For whiskey barrels the American process is to char quickly at high temperatures. The barrels are placed over a gas burning flame from anywhere from 15 seconds for a light char (char 1), 30 seconds for a medium char (char 2), 45 seconds for char 3 and for char 4 (known as an alligator char for the leathered, cracked  texture it attains) around 55 seconds. 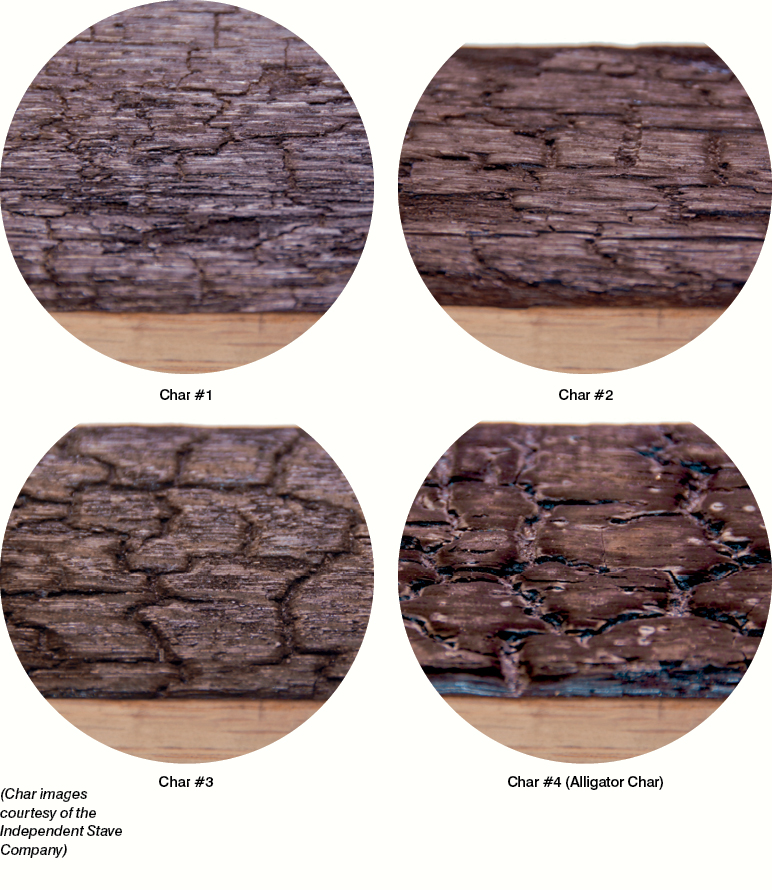 But just which type of char a distillery employs varies on their house style. “We generally specify a number two char,” said Larry Kass of Heaven’s Hill distillery. “This is a bit inexact,” he said, “as a char level comes from the length of time the inside of the barrel is allowed to burn and will vary from cooperage to cooperage, from barrel lot to barrel lot, and sometimes from barrel to barrel.”

There are things to worry about with this level of char, he said. “The deeper char level has a tendency to leak,” said Kass, “especially the barrel heads, since it compromises the wood more when it is burned longer.”

Chris Morris, Brown-Forman’s Master Distiller, also has control over the barrel making process too, as the company owns its own new barrel cooperage.

“This allows us to custom craft barrels for each of our brands. Woodford Reserve and Jack Daniel’s barrels have different char levels by design — because each brand has its own unique colour, aroma and flavour characteristics.”

But he didn’t want to give too much away when it comes to the char level they use. “We never reveal proprietary details,” said Morris, “but each brand has at least a medium level char [or, a number two char].”

New York’s Hudson Valley distillers, Tuthilltown Spirits, choose a number 3 char, and don’t like to mess around with it too much. “We really try to avoid accepting barrels with varying char,” said Vanaria, “due to the fact it throws our ageing estimates off.”

“Again, we avoid variance, but when have had barrels at different char levels in the past they never achieved the deep vanilla and biscuit notes that are a Hudson hallmark.”

Utah-based High West Distiller’s lead distiller, Brendan Coyle likes to use a range of chars. “Char can vary from product to product,” said Coyle, “but generally we hit a number four char for the majority of our ryes.

“For our [barrel ageing] program, because we reuse our barrels two or more times and have light whiskies as well as straights we are still sticking to heavy chars for the majority of our fleet. It provides great extractives and multiple use options.”

As always with this kind of endeavour, tinkering is taking place and new formulations being tried out.

“Interesting barrel treatment options are now coming out,” said Coyle, “for example, a slow deep toast is done  on the barrel prior to a quick medium or heavy char.” In effect, combining the methods of wine and spirits barrel coopering. “The jury is still out on the benefits of these type of treatments as they haven’t been around for long in whiskey terms,” he said.

For some, the primitive, mysterious nature of the interaction between spirit and wood is best left as it is. “While it is not entirely understood…” said Kass, “we have a tendency to just take these processes at face value, rather than the more analytical Scotch producers!”

But char is just one variable to consider. “Char is only part of the equation,” said Coyle.

“Generally speaking, the heavier you go on the char the more extractives you get and a richer, sweeter, more complex profile in the end.”

“But now you have to remember this is intimately tied to maturation time, temperature and humidity.”

Time comes through as important for Hudson’s Tony Vanaria. Their barrels are all new American oak and single use only. The spirit is put in barrel “at 57% (ABV) with no head space and allowed to mature for a variable length of time based on the barrel size,” he said.

Though, unlike their counterparts in Kentucky — where the hot and dry climate can see the angels taking a greater share of the spirit — when Hudson take a spirit out of the barrel it is the same strength it went in.

“The whiskey usually comes out at the same proof it entered the barrel,” he said. The proof at which the spirit will leave the barrel is a function of time and location, temperature and humidity.

Though they may be more inclined to view the interaction of spirit and wood at face value, here’s what they tell us is going on.

“To break it down as simply as possible,” said Coyle, “in maturation you have three main mechanisms going on.

“First, you have extraction of components from the barrel by the spirit. Second, you have reaction which occurs between chemical components within, and third you have subtractive interactions which pull certain undesirable compounds out of the spirit.”

Extraction, reaction, subtractive. Got that?

“The nature of American white oak is that when charred, the wood directly below the char actually caramelises, forming a half inch to one inch “red layer”.

But what does this red layer have to do with flavour? It is a source of the rich vanilla and caramel notes, said Brown-Forman’s Morris.

“The spirit soaks into the oak, penetrating up to half the thickness of the barrel stave and heading,” he said.

“The spirit will quickly begin to dissolve and extract these colour aroma and flavour characteristics from the wood. The secret is to extract the right balance of sweet character and colour — because colour is tannin-driven and too much of that can be detrimental to the final product’s palate effect.”

It is the changes in climate — often through the course of the day — the cause the spirit to ebb and flow through the red layer, said Vanaria.

“Temperature fluctuations (both seasonal and artificial) exaggerate and accelerate this process,” he said, “— warm alcohol swells and pushes into the wood, cooler spirit contracts and is pulled back out.”

The beauty of barrels: the old school tech that hasn’t gone away