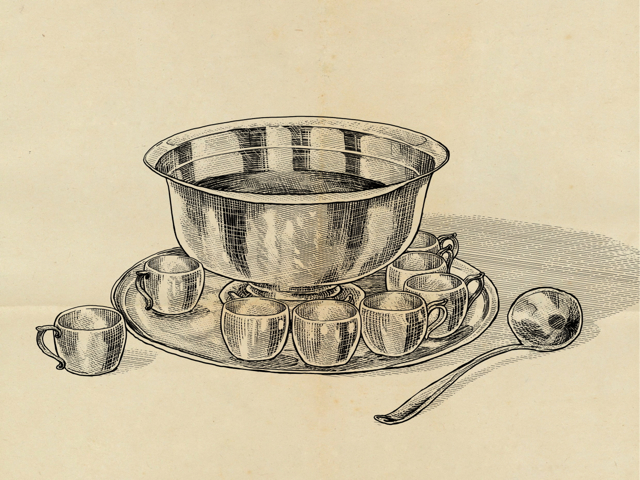 Story by Sam Bygrave
Illustrations by W. Chew Chan
In those dark times, before the Old Fashioneds and Sazeracs and Fizzes, there was Punch. It’s the idea of the pub — an occasion in which people gather at a place in a shared (drinking) experience — where they gathered around the flowing bowl. Punch is for sharing en masse.

Recipes for punch kind of lost their way a little over time, particularly from the 1950s onwards as the types of fruit and liquor going into the bowl multiplied. The classic recipes, though — like that for the Philadelphia Fish House Punch — have stood the test of time. That particular recipe comes down to us all the way from 1732, when it was the drink of the Schuykill Fishing Company — and later imbibed by some guy called George Washington. The recipe, in use in many bars today, remains mostly unchanged from the one that was passed on by Jerry Thomas, and today is 280 years old.

Its simplicity, perhaps, is the key to its longevity. See the Professor’s recipe to see why.

As a sign of just how much a fixture of drinking life these recipes were at the dawn of the cocktail era, its worthwile looking at Jerry Thomas again. Thomas listed a bunch of punches in his 1862 How to Mix Drinks, and they’re right at the front, suggesting that this is where the aspiring bon vivant ought to get started.

Dave Wondrich writes that, on the available evidence, it looks as though Punch was invented by an Englishman, and a sailor at that. It comes out of the 1600s and spreads throughout the world, beginning as a lowly drink until it reaches the highest courts and adopts the finest ingredients. 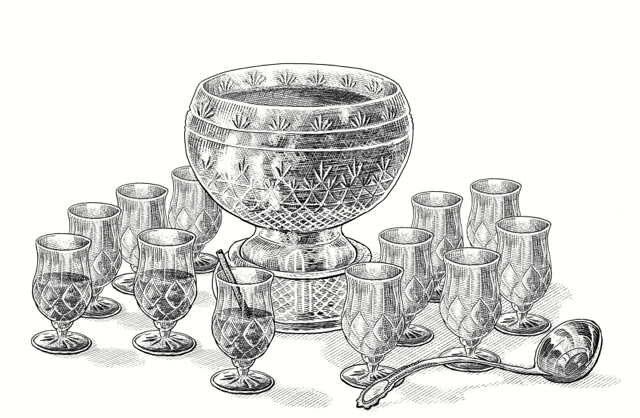 Given its long history, there are a plethora of recipes out there, as many as there are guidelines. Charles H. Baker Jr wrote that the “rules for a decent punch are few — but inflexible.” He gave four directives, including to use fresh fruit (and avoid canned), as regards sparkling or bubbly ingredients one should “save that pouring until the last second”; to use large blocks of ice to avoid excessive dilution, and in the case of cold punch, chill the ingredients an hour before service.

But Baker might also be where the second half of the 1900s lost its way when it came to mixing Punch. He also advises people to get creative with the colour and ingredients that go into their ice. On its own, that’s no bad thing, but from there its only a short slide down a slippery slope to a world of hen’s party’s punch bowls and penile ice molds.

When making hot punch, Thomas warns, one must put the spirits in before the water; if it is cold punch then the spirits go in last.

The Savoy Cocktail Book lifted their Punch advice from the Professor, arguing that the only secret is to have it all balanced, or as Thomas put it back in 1862: “thoroughly amalgamating all the compounds, so that the taste is of neither the bitter, the sweet, the spirit, nor the element, shall be perceptible over the other, is the grand secret.

It’s a point Wondrich agrees with. The familiar rhyming ratios, of say, “Two of sour, and one of sweet, / One of strong, and two of weak” are as varied and numerous as there are ingredients in punch. Wondrich, in his book Punch, lists four such rhyming ratios before suggesting Thomas’ ‘to taste’ ratios.

In the end, experimentation is key. And this is likely the way things would have gone on the sailing ships of yore, with spirits, some citrus, sugar and spice, and plenty of time at hand.

0
Australian Bartender May 3, 2013
No Comments Yet

Alcohol down the ages: What you drink says a lot about who you are and where you’re from