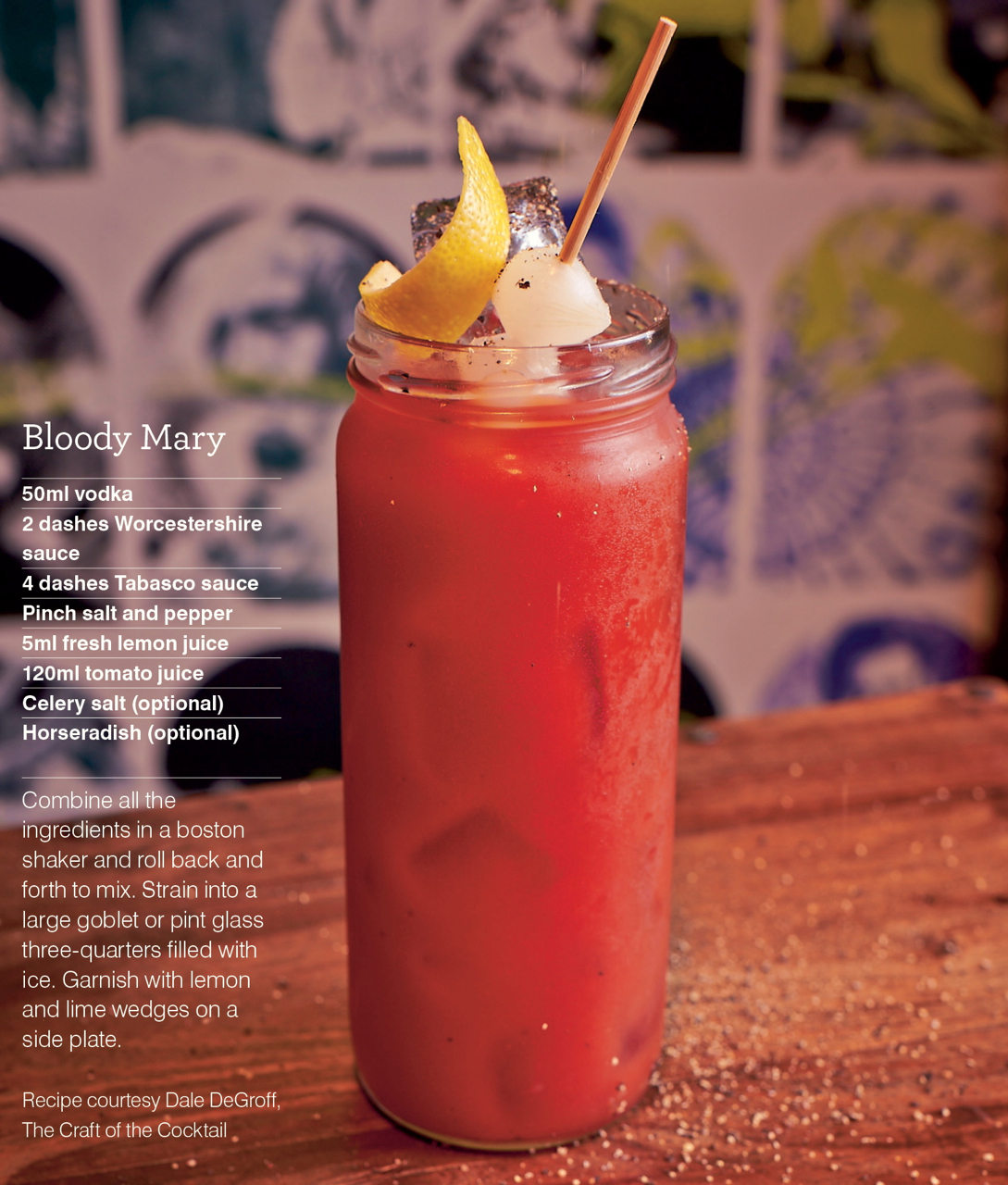 Hangovers suck. We all know it. You simply have to endure it and that takes time (at least a day, depending on your age), lots of water, Berocca, bad movies, sleep and, of course, really greasy food. You can, however, stave off the pain and push it to the next day with one of the world’s most popular hangover solutions, the Bloody Mary. “What better way to kick off a new day, especially when recovering from the night before, than having a boozy, spicy (healthy) smack in the face,” says James Bradey from Sydney’s Grandma’s and Wild Rover.

The mix of vodka, rich tomatoes, lemon juice and spices makes it a perfect accompaniment to a Sunday brunch as well. So who is responsible for it? Most drinks people attribute it to an American bartender, Ferdinand “Pete” Petiot, who was working at Harry’s New York Bar in Paris during the 1920s, making the most of the newly imported tins of tomato juice arriving in postwar France from the US. King Cocktail himself, Dale DeGroff says the drink was named after a patron called Mary, who was regularly left waiting for her man nursing one of Petiot’s tomato cocktails. Petiot returned to the US in 1936, running the King Cole Bar at the St Regis Hotel in New York. As vodka was unavailable, he substituted gin and called his drink the red snapper but it didn’t catch on. He also added black pepper, cayenne pepper, worcestershire sauce and lemon, with Tabasco sauce for a kick.

Drinks writer extraordinaire, Dave Wondrich adds to this history stating that the Bloody Mary started out as a drink named the ‘Timoshenko’ and quickly shed its foreign sounding name for the more Anglo one. He adds that this drink is only “second to the martini in the world of WASP drinking.”

But back to the beverage. The great thing about the Bloody Mary is that it’s so diverse. You can use different spirits, different juices, different spices and even a different shellfish garnish to create a drink to your liking. The fellas over at Wild Rover in Sydney’s Surry Hills, feature three Bloody Mary variations at their venue (see below). According to James Bradey “the Bloody Mary has stayed relevant because it is so versatile. Tomatoes are found in cuisines all around the world, work with Mediterranean flavours, Asian or middle eastern spices and can be grown year round.” So no matter what time of day it is, remember the Bloody Mary. She’s a classic and she’s stood the test of time for a reason.

Kilpatrick Mary: Bacon Fat washed Ketel One with a roasted tomato blend. The tomatoes are oven roasted with Worcestershire, Tabasco, cayenne pepper, black pepper horseradish and tomato juice then blended and pushed through a fine sieve.

Get the recipe for Halford’s Pandanmonium here

Three Margarita recipes — a classic, a Tommy’s, and one from left-field