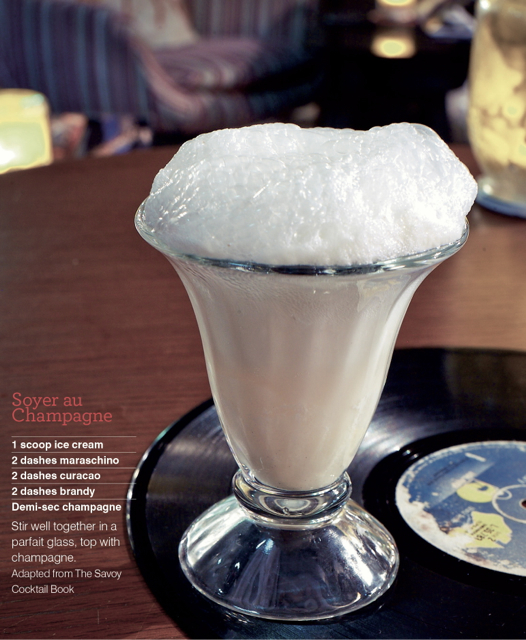 Ever missed being able to order a Coke Spider? Here’s a drink that’s similar, but a little more refined — heck, the name translates from French to Silk with Champagne. It doesn’t get more refined than that (at least as far as sugary drinks go).

Champagne didn’t always effervesce. Though the area had become known for as a place of some quality, the wine it produced was “light, pinkish still wines made from the pinot noir grape”. Eventually, though, these wines came to be overshadowed by their sparkling successors.

Right throughout the 1800s one was more likely to sip on a sweeter style of champagne — for the most part, dry brut styles of champagne just weren’t made. Because the Champagne region is so cold, the grapes don’t ripen as early and fully as grapes from warmer, sunnier regions. This means that come harvest time the wines retain a great deal of acidity. To combat this Champagne houses would add a liqueur d’expedition, otherwise known as the dosage, prior to bottling to sweeten the wine. In the 1800s there would be a great deal of sugar added to balance out the acidity, as they wanted to be able to sell their wines without much aging.

Dry styles of champagne only came about after Perrier Jouet released a zero-dosage wine in 1846; these were still uncommon in later years, so that when Pommery released it’s ultra-dry 1874 vintage to London it caused quite a stir.

So it’s best to keep that in mind when making this drink — the key is to go all out on the sugar, particularly if the old Coke spider is anything to go by. Coca-Cola has something like more than 100g/L of sugar — which, incidentally, is enough sugar to meet the European Union’s definition of a liqueur. But champagne’s sugar levels rarely get that high these days. Most of what you see on the store shelves will sit around the level of brut, which for champagne, means there is less than 15g of sugar a litre. Anything from a brut to a demi-sec (between 33-50 grams of sugar per litre) style of sparkling should do the trick here.

Ted Haigh aka Dr Cocktail dates the drink to around 1888; it was certainly on the scene by the time Frank Newman had written his American Bar Boissons Anglaises et Americaines in 1904, when he described it as a mix prepared in a 250ml glass half-filled with shaved ice of four dashes of orange juice, half a glass of grenadine liqueur, six dashes of curacao, and four dashes of maraschino and to finish “with champagne, garnish with two half-slices, serve with straws”.

An early predecessor to the Soyer au Champagne comes by way of a drink called the Champagne Cup, No. 11. Whilst it’s not a particularly evocative name, it is one of a number of cups that William Terrington describes in his collection of drinks from 1869, Cooling Cups & Dainty Drinks. It combined two bottles of sparkling champagne with half a pint “of strawberry or lemon water ice”
and two bottles of soda water. Which you must admit, is a bit like a Sgroppino, when you think about it.